The first week of last May started under thermal average for many European countries. It’s a noteworthy weather event, as reported in the chronicle, which stems from a weakening of the polar vortex due to a stratospheric warming event, the last of the spring.

The European event, ‘regional’, should not be confused with the climate, which is always characterized by an above-average global thermal trend. To get us to explain what the polar vortex is about, we asked the expert meteorologist Francesco Nucera of the Meteomed team for help. 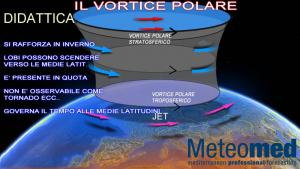 “This is not an unusual phenomenon, nor should it be confused with the classic low pressure that is shown on weather charts. The polar vortex is always present and is what characterizes the time at mid latitudes. It is a wide wheel of winds at high altitude that turns counterclockwise in the northern hemisphere, circumnavigates the earth and has its center of gravity on the pole. For this reason it takes the name of vortex.

It contains relatively cooler air (very cold on the pole) than the air mass in sub-tropical latitudes. In the zone of interference between these two air masses, where the contrasts are lit, perturbations are generated. Meteorologists identify this area as a jet stream or ‘Jet Stream’.

When the polar vortex is strong, there is a clear division between cold and hot air. As a result, cold raids are less likely and limited. When the polar vortex is weak, the opposite is true. Anticyclones move northwards, pushing warm air towards the high latitudes: cold air, on the other hand, inside more or less large pockets, moves towards the medium latitudes accordingly.

The colder these bags (or lobes) are, the more noticeable the effects are. In winter these bags are able to bring temperatures below zero, snowfall at low altitudes and waves of bad weather. In the most extreme cases in those climatic anomalies that go by the name of Stratwarming Major, the polar vortex can even leave its usual location, be replaced by a polar anticyclone and pour its icy content even in mild places (polar vortex split).

What will happen next? “Now the stratosphere will no longer have any influence since the stratospheric polar vortex has been replaced by the polar anticyclone. However, the circulation in the mid-latitudes will still suffer in the coming weeks from what happened during the spring. Waves of heat, therefore, still far, probably, from Italy”.

There are no ads matching your search criteria.
Seguire Instagram
PrevPrecedenteThe cruiser at less than 200,000 euros: top 8 boats
SuccessivoAn American in Cannes, Ocean Alexander arrives in EuropeNext
In evidenza