This “spaceship” is Wally’s new superyacht. It is called WHY200

Just look at this image above to understand that it is a Wally. The Monegasque brand, now part of the Ferretti Group, has an established reputation as an innovator, both in design and technical solutions on board. The latest project is called Wally WHY 200 and is the latest frontier of nautical design. The new Wally WHY200 will make its debut at the Cannes Yachting Festival (September 7-12).

At 27 meters long, the new Wally WHY200 brings with her a number of seemingly contrasting features. For example, the interior spaces are incredible with a forward owner’s stateroom and about 50 percent more liveability on board than an equally long powerboat. At the same time, however, the performance is that of a semi-displacement yacht and not a pure displacement as you would expect.

This superyacht has on its side a series of important names in design, starting with the Wally team, led by Luca Bassani, working together with the Ferretti Group Engineering Department. Also collaborating are Laurent Giles NA for naval architecture and Studio A. Vallicelli & C for interior design.

The challenge to catamarans and their infinite volumes is open, and this motoryacht also brings some advantages. Stability is still on the side of multi-hulls in terms of stability of form, but as Stefano de Vivo, Wally’s Managing Director, explains: “…thanks to its widebody profile, this 200 GT yacht offers both much more generous volumes than conventional powerboats, and a living area and stability decidedly superior to any other competitor. In fact, it has all the advantages of a catamaran but without its limitations, namely the lack of volume brought by the central hull and the difficulties of mooring.

WHY200 features a 4.7-meter-high glazed bow that houses a 37-square-meter master suite overlooking the sea, with uninterrupted 270-degree views of the horizon. In addition, this cabin is exceptional thanks to a layout that places the engine room at the opposite end of the boat.

The Wally’s upper deck has a glass and carbon dome, typical of Wally that is also echoed in the clean, angular aesthetic, a hallmark of Wally since the 118 Wallypower. Also on the upper deck, the elongated, structural pillarless top is the result of painstaking design and engineering work.

The first unit, which will be “Wally Silver” in color, will feature a four-cabin layout: the master with two separate bathrooms on the main, a VIP, and two guests on the lower deck. The absolute novelty will be a carbon staircase laminated in a single piece that, in addition to having a load-bearing function, has the task of connecting the three decks with lightness. Thus, any bulkheads in the 61-square-meter open space salon with a kitchen will be superfluous. Open-pore teak has been chosen for the furniture. Always in teak will be the walkways of the two lounges and the corridor of the lower deck. 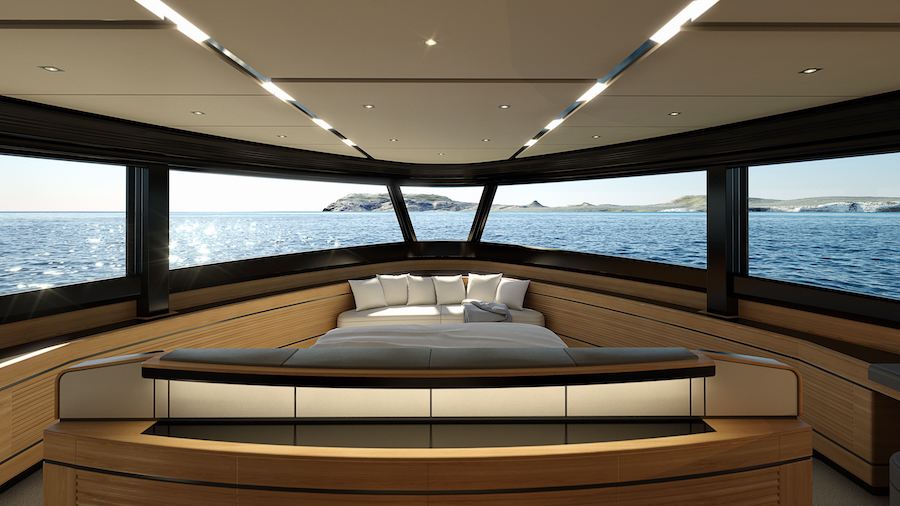 Thanks to the 5G wireless network connection with home automation control, the guests will be able to manage all the audio/video systems through mobile devices, both outside and inside the boat and control – through the integrated system of Naviop – also the data related to navigation, keeping constantly under control the progress and the parameters of the yacht. The first unit will mount a 55″ TV in the upper salon and a 5.1 Premium audio system on the main and upper, while a Sonance audio system will serve the external areas. 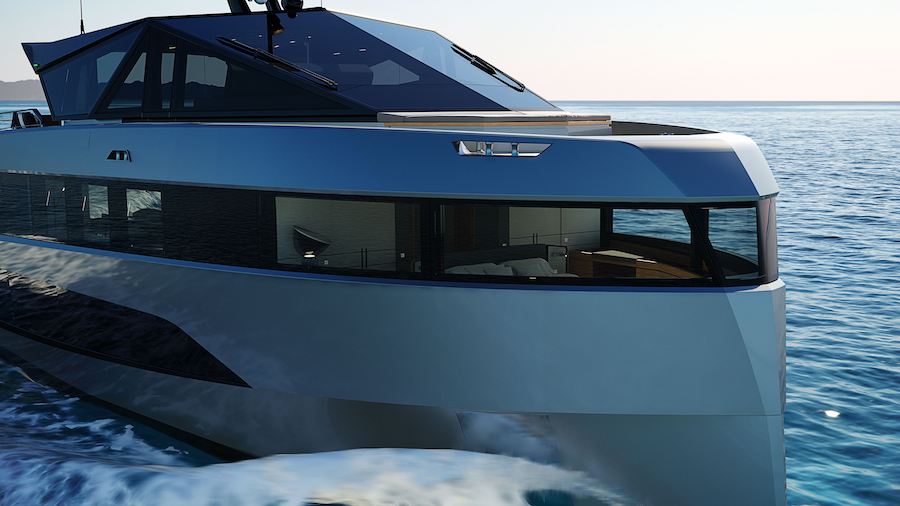 WHY200 thanks to the folding walls of the beach club has an access to the sea on three sides that bring up to 32 square meters of surface available aft. WHY200 also has two garages with a considerable storage capacity: onboard can be housed a 4.05 m jet tender, wave runner, seabob, paddleboard, and any type of water toy.

Its high-performance hull is able to cut through the waves without beating thus reducing pitching to the maximum. This hull is coupled in the case of the first unit with 4 Volvo Penta D-13 IPS 1350 engines of 1000 hp each, among the most advanced propulsion systems on the market. Thanks to these features WHY200 can navigate at up to 23 knots while maintaining a horizontal trim without ever changing the comfort of the guests onboard. Moreover, its width, together with the stabilizing fins that can be activated both at anchor and during navigation, supplied as standard equipment, and the two Seakeepers, ensures excellent stability.