The 10 immortal yachts for the designer Alessandro Nazareth

Alessandro Nazareth is the president of the International Technical Committee of the Offshore Racing Congress (ORC). For 35 years he has been designing yachts with the Vallicelli Design studio in Rome and has contributed to the design of over 200 motor and sailing yachts, including two competitors in the America’s Cup (the Azzurra Challenges 1983 and 1987).

His technical skills range from hydro/aerodynamics to structural issues, including extensive experience in tank and wind tunnel testing, CFD (Computational Fluid Dynamics) analysis and FEM (Finite Element Method). We asked him what are his 10 favorite motor boats in the recent history of yacht design and why he chose them. Here’s what he told us.

In my adolescence I spent summers in Santa Margherita Ligure and often went to Portofino. It was in the 60s, the Riva Aquarama was the most admired and exclusive motorboat. In the morning, the various sailors in the port would open the hoods and turn on the engines for the shipowner who would arrive to take the daily swim.

My father’s passion had already routed me to become a sailor rather than a “speedboat”, but that boat all-mahogany polished with the stern that combines the surfaces of masonry, deck and transom in a single surface attracted me very aesthetically. I didn’t know anything about jet sets and famous people who rode the Aquarama but the boat really impressed me.

Aquarama had two General Motors derived engines, and Chrysler, from 185hp up to 400hp (it could reach 45 knots). The engine compartment was covered by a sundeck with normally turquoise mattresses, there was also a bellows top, which disappeared behind the rear seats, for the time a very successful gadget. The particular two-tone steering wheel with turquoise blue was also of automotive derivation. It had various elongated versions like the SuperAquarama and fortunately, many collectors have kept them in excellent condition and you can still see them in our ports. 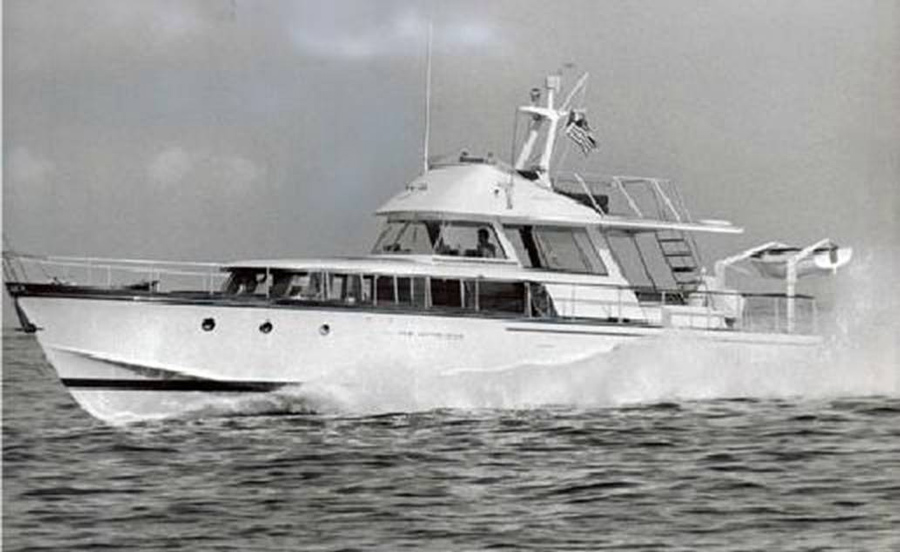 The Baglietto Ischia can be considered the first superyacht since for the 60s, a 16 meters boat was considered as something not within everyone’s reach. In any case, the law of the time did not oblige to have a “maritime master” on board, which is a qualified sailor, so the maintenance costs were lower than an equivalent yacht today.

It is was the boat that made the name Baglietto known not only in Italy but also in the world. I’ve seen it now when they were out of production, at the beginning of the Anni 70, I really liked the setting of the dashboard at deck level and the dinette under the glass deckhouse

The boats almost all had a flying bridge but the version I liked the most was the one without: it was sportier and more aggressive. Built-in lamellar mahogany with monohedral hull, it had two engines for a total of about 700 HP and reached a remarkable speed, about 20-24 knots. 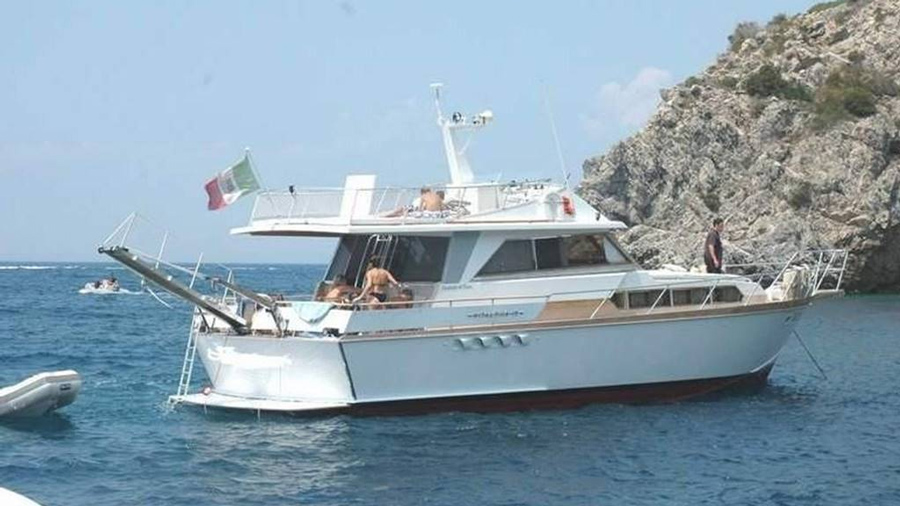 In the mid-60s I began to spend summers in Castiglione della Pescaia where my parents had built a house. Among the most indelible memories, there is the largest motorboat moored in the canal port, among other things on the quay where the boats of the Sailing Club where I passed every day.

The boat belonged to a Roman mineral water entrepreneur. His name was Luigiotto and he was a Kitalpha 15 of the Cantieri di Pisa.

It might have looked like a revised and correct version of the Ischia di Baglietto, but it wasn’t. The layout of the superstructure was much more backward with a smaller cockpit and different internal arrangements. Also, the Kitalpha was built in lamellar mahogany, but using a bit of marine plywood on the sides (dead work) interposing also fiberglass mats between the various layers (technique then used a lot also by us in many lamellar wood constructions even on sailing boats).

The hull was very performing, with less than 400 HP it was able to obtain speed on 20-24 knots.

A’ Speranziella by Sonny Levi 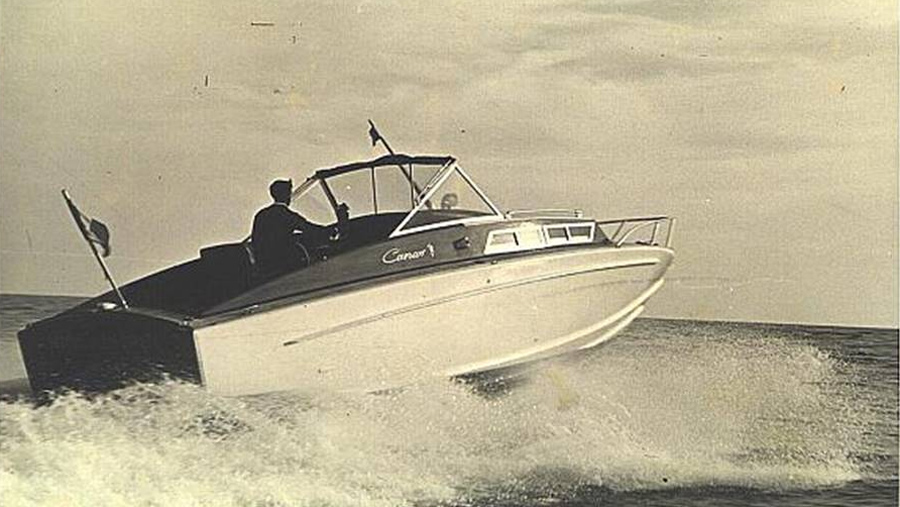 Sonny Levi’s Speranziella is certainly the boat that has remained in the memory of the generation before mine, like the sports boat par excellence. I was too young but there were still many of them in the pleasure version when I was a teenager and they were particularly elegant with the white hull and the sides of the low mahogany cupboard (which we also used on many wooden sailboats).

The original that won the Cowes-Torquay 1963 (one of the great Offshore classics of the time such as the Miami-Nassau or the Viareggio-Bastia-Viareggio) was all mahogany cupola. The hull had a very pronounced dihedral angle and constantly immersed sections for a good part of its length an optimized structure as weight (pronounced use of spray for the longitudinal structures, no ribs, together with the mahogany lamellar planking). Motorization up to 800 HP to reach speeds over 40 knots. 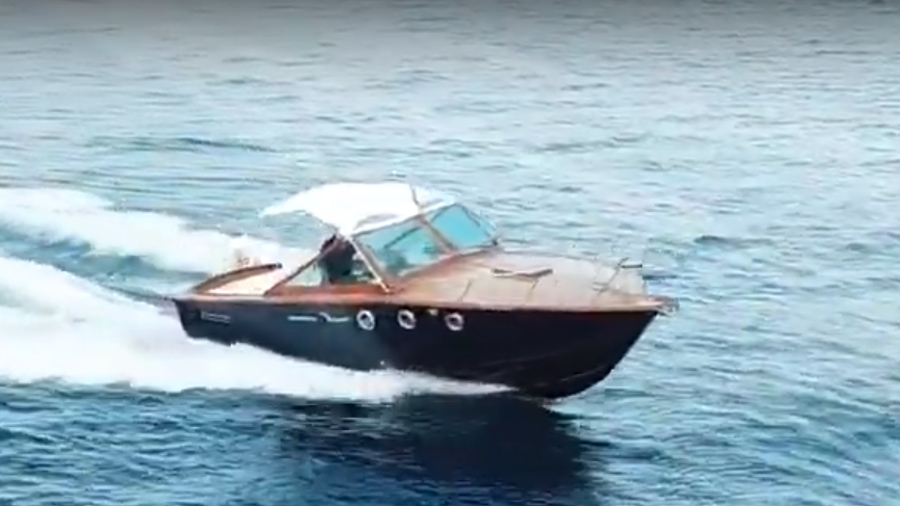 Built by Italcraft in Bracciano (several hundred examples) since the ’60s was a very popular boat in the Tyrrhenian Sea and I often saw some of them moored in some cove between Punta Ala, Castiglione and Argentario.

It had an unmistakable aesthetic from the inverted pony with a very pronounced downward curve towards the bow that was very noticeable when moored. It had a slightly excessive windscreen (perhaps the only out-of-tune note) but I imagine it protected the crew from the splashes that wet the deck with formed sea.

The hull was semi-planing with a very pronounced dihedral angle that gave it a lot of stability’ of course and was made of marine plywood, so a fairly simple construction.

The engine could exceed 300 hp for a cruising speed around 20 kts (it was a semi-displacement hull). 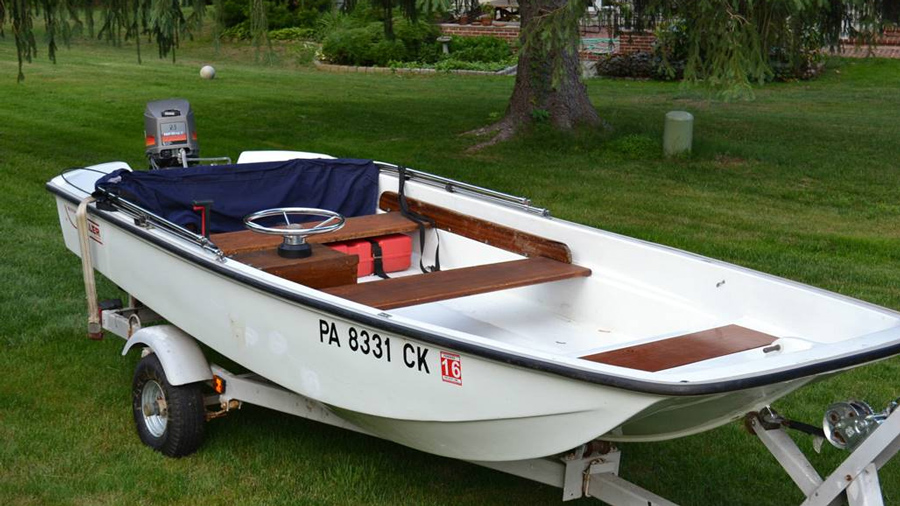 When I started spending summers in Castiglione, if we weren’t in FJ at sailing school we spent days sailing with my father. Unfortunately, my mother didn’t like sailing very much so my father also bought a “motorboat” (so it seemed to me then) used which was called “Troiaio” (the Maremma people know the many meanings of this word), famous because in the advertisement of the American shipyard you could see the boat sawn in two that continued not only to float but also to move.

It was a Boston Whaler 13′ with a side console on which I, a convinced sailor, learned the rudiments of driving a motorboat. With the particular triple V hull very little pronounced just a little wave of mistral was enough to start crashing (luckily my back did not suffer too much).

I remember that with the Boston in 1969 we assisted for the European Championship 470, which I think had become Olympic boat in that period, driving its French designer Andre’ Cornu, a very nice guy (maybe I understood that designing boats could be a fun job …). 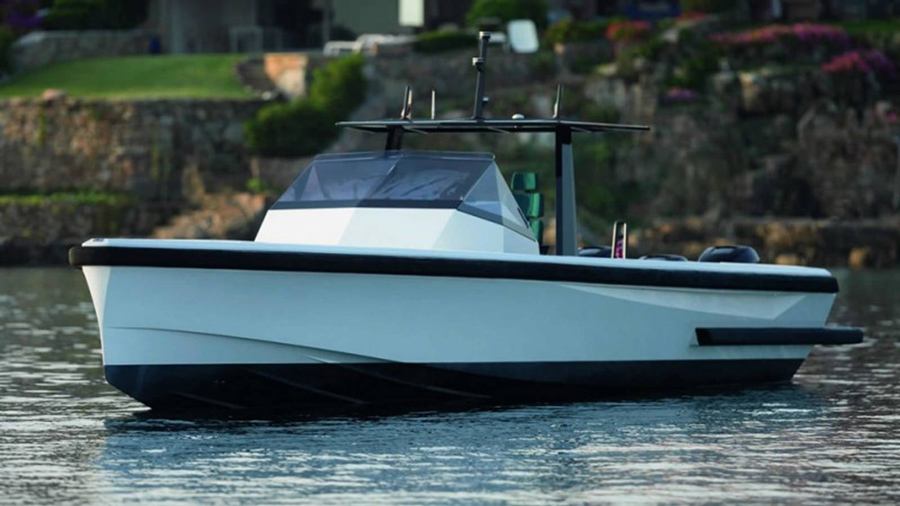 I put the first Wally Tender because Luca Bassani, as he invented the concept of fast-cruising for sailing boats, has imposed on the market a new genre for the tender, the modern fast-tender to support the maxi yacht. Then enough was made of it to become a bit of a status-symbol and a model to imitate (at the recent Düsseldorf boat show there was an entire pavilion dedicated to tenders with dozens of Wally Tender’s epigone models.

About 15 years ago Luca Bassani asked us, as experts in glulam construction, to design the wooden version for one of their historical client, it was an amusing work and unfortunately, we could not complete it (it would have cost much more than the composite model….). 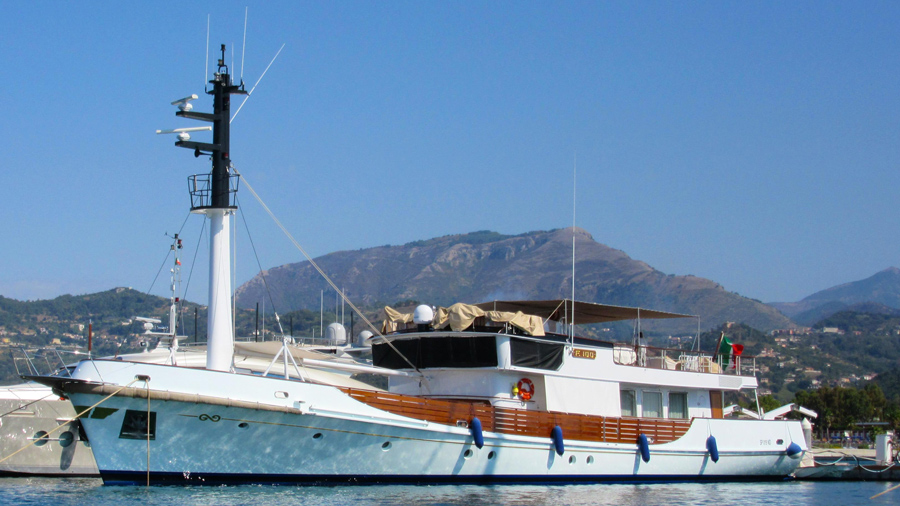 Agnelli’s F100 was the progenitor of a genre, the explorer yachts, which has since become much more than just a niche in the motor yacht market.

Launched in 1983 by CRN (Ancona) and designed by Gilgenast, it was optimized for long transits in all weather with high comfort in a minimalist style and was among the first to adopt floating floors that were insulated from vibrations.

I remember when during Azzurra Agnelli’s training sessions he arrived by helicopter, landed on F100 and was brought on board with a tender. After trying the boat for no more than an hour (as well as having many engagements he got fed up quite quickly) he dived into the water where he was recovered from the tender and returned to the F100

I took the liberty to include Okto as a representative boat of my studio, for its particular style is still very current despite the fact that it was launched by the ISA shipyard in Ancona in 2014 and designed in 2011.

With a length of 66 m she is the biggest (for now, she will be soon surpassed by a couple of yachts we have under construction in Italy and Turkey) boat launched according to our studio’s project.

Still today we receive many compliments on this boat and we hope to make an evolution in some other shipyard soon.

SEABOB F5S WHITE CAM
Salerno
10,000.00€
Seguire Instagram
PrevPrecedenteHere’s your First Look to the New Sacs Strider 15 at Sea
SuccessivoHow Much Italians Spend for Their Boat in a YearNext
In evidenza

Cruising boats, but compact! 5 cabin cruisers for all tastes

Cruising belongs to a fascinating and evocative imagery, a prolonging navigation, taking us beyond the limits we can reach on a daily basis, broadening our horizons. Yet we tend to imagine it as a possibility relegated exclusively to large vessels.

The call of the great outdoors, that ideal abandonment of cities and busy lives, would seem to have become stronger than ever. Dreams and fantasies that are increasingly turning into reality, aided by the growing opportunities for smart-working and remote

Bavaria SR33 is the powerboat that expands and completes Bavaria Yachts’ new SR range. Introduced in 2020 with the Bavaria SR41, in a very short time this family of boats has carved out an important space in the market, leading

At METS 2022 in Amsterdam, Aceleron, a start-up company that brings to market Essential, a cobalt-free lithium-iron-phosphate battery system with replaceable parts, made its debut. In fact, it has a structure that is not welded, but is assembled by compression.