Technohull Omega 47 is the new flagship of the Greek shipyard Technohull, specialized in the production of ultra-powerful rib boats. Do you remember the Technohull GS 38, the 100-knot cruiser rib boatt? (read the article here) Now comes another powerful rib boat, evolution of the Omega 45. It can be powered up to 1,800 horsepower with four 450-horsepower outboards.

.
Cruise comfortably with a nearly 14-foot (13.80-meter) rib boat that nevertheless touches 80 knots of top speed. Unbelievable, isn’t it? But it’s reality. The Greek shipyard Technohull strikes again presenting its new flagship that is already going fast. In fact, there are already seven hulls of this boat sold in the world. Obviously, maximum performance depends on motorization, conditions and all the variables that can influence top speed at sea.

The deck is spacious and several configurations are available, including extra helm seating, a cockpit table and additional sundecks. And in the cabin below deck, there’s room for a V-cabin and a full-height shower compartment and heads.

The cabin receives natural light through sleek windows in the deck head, but also benefits from LED lighting, which elegantly accentuates the high-end finish. Quality leathers, exotic veneers and premium Corian combine to create a sense of true luxury. It’s a practical space, too, with room to stow clothes and other items underneath.

.
With a full walk-around layout, you have easy access to a large sundeck and seat forward, where an optional bimini can be mounted on carbon posts. Aft, there is an even larger sofa in fine, hand-finished leather. There’s a fully equipped bar area with a refrigerator, optional cooktop, espresso machine and watermaker, making it easy to entertain up to 12 guests aboard. And high-quality Fusion Apollo marine audio comes standard, so you can set the mood at the touch of a button. 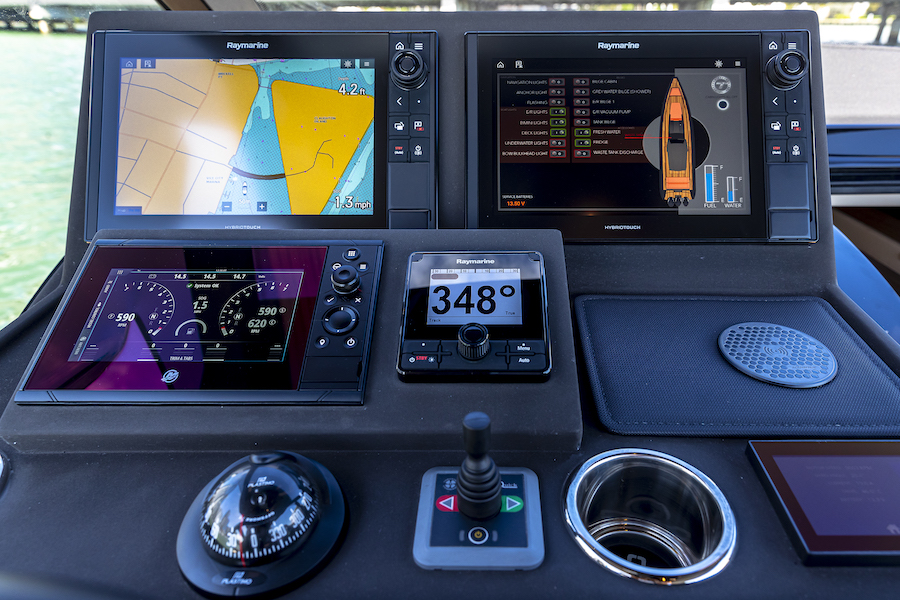 Performance is as much a part of the new Omega 47’s DNA as all Technohull boats. The versatile transom design gives the owner plenty of choice when it comes to propulsion. Options include two 600hp Mercury Verado outboards (read here). Otherwise, there’s room on the transom for up to four 450hp Mercury Racing engines, or diesel inboards..

Performance can exceed 80 knots thanks to Technohull’s patented Dynastream hull. Developed over five years with a dedicated in-house team of naval architects, Dynastream is a double-step hull. This provides unprecedented lift, cushioning and stability at all speeds.

Through a rigorous process of CFD simulation, scale and full-size tank testing Technohull has gained a thorough understanding of this technology. It’s part of what allows the boat to glide at low speeds and achieve its impressive top speed. The super-deep V hull shape also makes the Omega 47 a dry boat that deflects spray and cuts through waves.

Interest in electric boats at this time is very high. Candela demonstrated this in late 2021 with the C-8, an electric boat with foils (priced from 290,000 €) that sold as many as 60 units in one month(read more here).