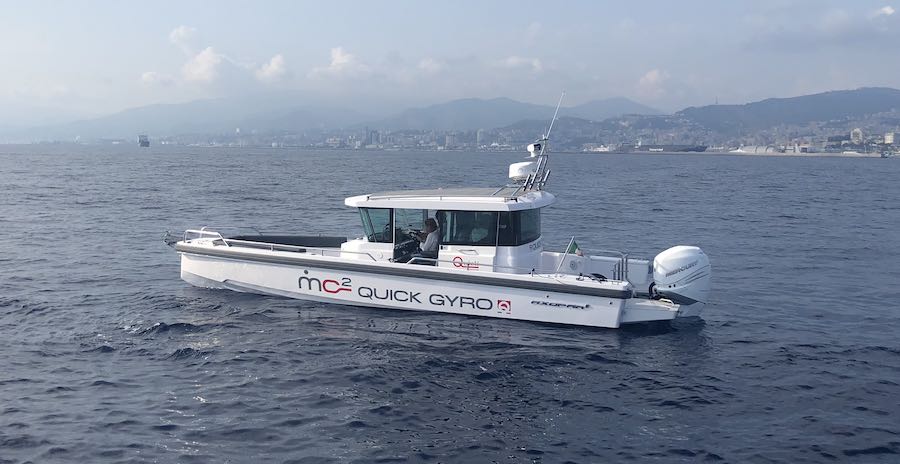 News from Quick at the Genoa Boat Show where the gyro stabilizer MC² Quick Gyro X2 arrived. The new MC² Quick Gyro X2 was born with the aim of reaching boats of small size compared to those already “stabilized” by the Quick range.

The stabilizer also for the day cruiser

Whether you’re a small boat or a day cruiser, the MC² Quick Gyro X2 gyrostabilizer is powered by a 12V DC battery (no need for a generator), and features an extremely low weight (about 130 kg) and a compact design.

A stabilizer for motor boats that is aimed at the world of pleasure and fishing, as demonstrated by the success that this type of accessory is also having on the American market where fishing is one of the “strong points”. On board the Pardo 43 and the Axopar 28 we “tested” the Quick stabilizers. On board Axopar we saw how the MC² Quick Gyro X2 works, while on the Pardo 43 we saw the X13.

As you can see in the video, the boat with the stabilizer in operation remains stationary at the passage of the waves, in short, a godsend for those who suffer from seasickness.

Quick Stabilizer: all the novelties

The series of stabilizers signed by Quick spaces from X2 to X56 thus offering different models depending on the boat on which it was decided to install the machine.

The new MC² Quick Gyro X2, X3 and Mc² Quick Gyro DC range of stabilizers for 12V systems are presented with a new look: in July 2019 Quick Spa presented the new logo of the entire series of gyro stabilizers. The new design represents the entire range independently of the identification of the “X” series and is similar in colour and line to the corporate logo, thus reinforcing the file rouge that embraces the image of the entire company.

The MC² Quick Gyro gyrostabilizer developed by Quick Spa is equipped with a flywheel rotation system on a horizontal axis, which means less mechanical stress and friction, drastically reducing heat generation. The gyro stabilizer by Quick is a natural dissipation system, so it does not require new sea outlets or water pumps.

The nautical calendar started out great for Quick Spa, which at Cannes 2019 also presented to the market the acclaimed QNN – Quick Nautical Network, an innovative device that allows to integrate Quick systems with navigation systems.

Stabilizers: six models, how they work and price

There are no ads matching your search criteria.
Seguire Instagram
PrevPrecedenteAxopar 28, the Finnish dayboat live from Genova
SuccessivoOris Ocean Trilogy, Saving the SeaNext
In evidenza