The incredible challenge of solar boats (and not only) in Monaco

A motorboat race that doesn’t use gasoline? Here is the sixth Monaco Solar & Energy Boat Challenge, the race where the only allowed engines are renewable. It’s like the Formula-E of cars (car series designed exclusively for vehicles powered by electric motors) or almost, because those in the race will not only be electric boats, but also hydrogen, compressed air and so on, more of it. This year the event is from July 2 to 6 organized, as is tradition by the YCM in collaboration with the Prince Albert II Foundation of Monaco and the International Powerboating Federation (UIM).

A few days ago at the end of the Monaco Ocean Week, the week dedicated to the protection of the oceans, the Yacht Club de Monaco (YCM) presented the new edition of the Monaco Solar & Energy Boat Challenge.

Started in 2014 as a borderline event and dedicated to universities, the Monegasque event has become increasingly interesting for real shipyards and boat manufacturers on the market. A sign that the direction is the right one. The Principality thus maintains its traditional proximity to the races and meetings of motorboats that began here in 1904. And at that time, motorized pleasure boats were as futuristic as electric boats today: the first motorized pleasure boat, it seems, was launched only 20 years earlier in Michigan (USA), on Lake St. Clair by Christopher Smith.

Where environment and creativity win

The Munich Solar & Energy Boat Challenge brings together three categories of motor boats in the classes: Solar, Offshore and Energy. The objective? Leave the field open to the creativity of researchers and young engineers, working with experienced manufacturers, to design and develop alternative propulsion systems for yachts, using only clean energy sources.
The event format includes a competitive part, but above all it is an opportunity for over 40 international teams of students and professionals to share progress, clarify doubts and develop possible collaborations on clean energy systems during the Tech Talks on Open Source.

Bernard d’Alessandri, Secretary General of the Yacht Club de Monaco said: “With regard to concerns for the future of our planet, we believe it is essential that the pleasure boating sector embraces clean energy sources to reduce greenhouse gas emissions, in line with the commitments made by States during the Paris agreement. Convinced that we must lead by example, and as an integral part of our “Monaco: Capital of Yachting” project, we want to stimulate people’s awareness and assist and support these young engineers who I find very interested in environmental issues.

Solar Class: move me or sunshine!

Present in every edition since 2014, it is the most iconic: the boats with a huge blanket all covered with photovoltaic cells. In the race there are about 20 competitors and despite the fragile appearance and unusual shape of the prototypes in the race, the average speed achieved by the competitors is around 20 knots. 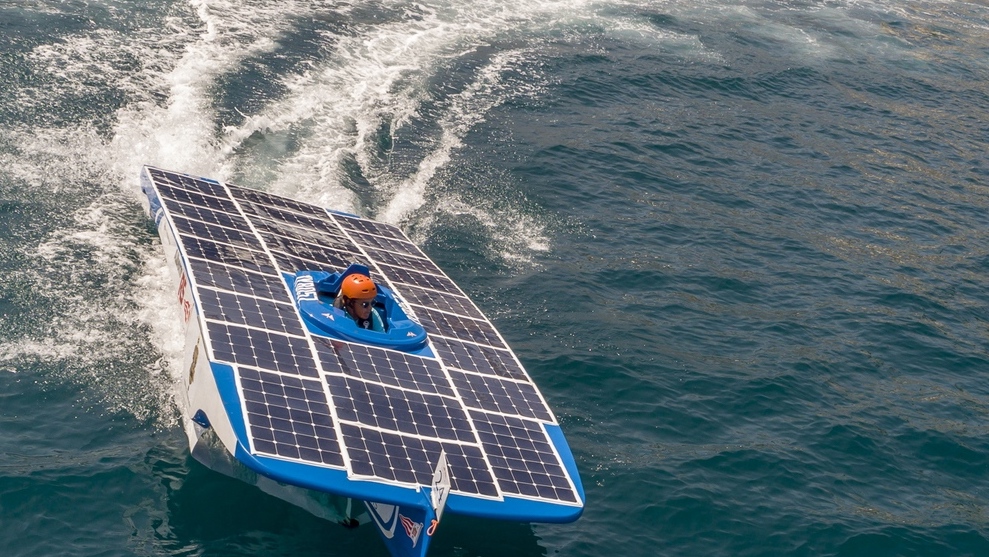 “The technology is absolutely incredible: these are racing boats, even highly competitive, with the use of foils bring the hull out of the water,” says Bertrand Piccard, co-founder of Solar Impulse and sponsor of Solar Class. “There is no noise, there is no pollution, there is no fuel, you are really in harmony with nature and at the same time you have all the suspense of the real competition. I think we really have to show where the most advanced technology is taking us: it’s taking us far, in the right direction,” he concludes. It should be noted that in this class the vast majority of competitors are from Holland with 8 teams out of 11 currently registered.

Energy Class: everything, provided it is renewable

New category, introduced by the YCM last year to create a true comparison between different sources of energy for propulsion (electricity, hydrogen, compressed air, etc..). The challenge for students working with industry is to design the most powerful and durable propulsion system using clean energy sources to power the one design catamarans supplied by the YCM (length: 5m; beam 2.5m; height 0.45m; displacement: 250kg; speed: 15 knots) to which competitors will have to add a cockpit for the pilot and propulsion, precisely. For 2019, hydrogen seems to be the most popular choice: out of eight boats registered to date, three are working on this solution: SBM Offshore E-Racing Team (Monaco), HEIG VDI (Switzerland) and Hydrogad’z of Arts et Métiers (France). Among the competitors also the Italian Antwerp with Antwerp E Lab and the Swedes of X Shore.

Offshore Class: ready for the market

competere over a distance of 36 nautical miles without fossil fuels. A double test between Monaco and Ventimiglia and back. While the two ports will soon be interconnected, this race serves as a field test for users of new energy sources. This is for example an opportunity to test the new generation of electric tender and daycruisers, developed by the pleasure boat industry, in the real conditions that can be expected to be used in normal boat use.

Zero emissions at sea and also on land

For the sixth edition, the Yacht Club de Monaco and its partners have launched the challenge glove to competitors and the Monegasque community to produce emissions as close to zero as possible throughout the week, banning all fossil fuels.
On land and at sea, initiatives to reduce the impact of the event include electric or hydrogen bicycles and cars, with electric vehicles being recharged courtesy of the Suncy boat; environmentally friendly water bottles and water dispensers to reduce waste; solar ovens, etc. Any initiative will be encouraged and promoted.

It is with this in mind that YCM has signed a partnership with Torqeedo, a recognized leader in electric outboard motors to ensure that all boats involved in the organization of the event are 100% electric.

After the success of Tech Talks and Open Source in 2018, YCM is keen to expand this aspect of networking and knowledge sharing with conferences held by key industry players.

Two mornings of discussions on the main themes are also planned: Environmental challenges and opportunities in the maritime world (Thursday 4 July) and Sustainability and energy efficiency in Yachting (Friday 5 July)

Finally, to encourage and motivate students in their research, a series of prizes will be awarded by a jury of experts, including an Innovation Prize, Best Tech Talk and Zero Emission Award.

The world and the future in Munich

Thanks to its original format, the reputation of the Munich Solar & Energy Boat Challenge is spreading throughout the research and development community, attracting teams from around the world: for example, the Hydros Team Universitas Indonesia competing in the Energy Class. Other teams are coming to watch to participate in 2020, such as the Sanya Visun Royal Yacht Club (China) and the Rochester Institute of Technology in Dubai. It is reassuring to note that for the new generation, the energy transition is a hot topic around the world.