Up to ten meters the Med Boat are this way. And then? In one meter, or better, in eleven, we find seven day cruisers evolved different from each other for characteristics, but all united by a common thread: that of being Med Boat.

With no license required, this boat features streamlined charming lines. The deck house is low, modern and high-tech (it hides both the electrically-operated windscreen and the sunshade). Voluminous loofs and wide forward sections offer enough room to accommodate two double cabins. More specifically, the master cabin is positioned in the bow and its presence is suggested by the presence of a bright opening in the topside while the second cabin is located under the cockpit. A bathroom with separate shower compartment and a galley on the port side complete the interior layout, which is really surprising. Power can come from one or two inboard engines.

The Envy 110 HT is the flagship of the Scanner Touring line. Layout is classic, with two sun pads in the extremities and the possibility to convert the forward area into a dinette where to have lunch; an additional dinette is positioned in the middle of the boat, with a folding table, a grill, a sink and a refrigerator. Below the driving console, there is a double cabin with bathroom. Power comes from twin Volvo Penta V8 350hp engines or two outboards. 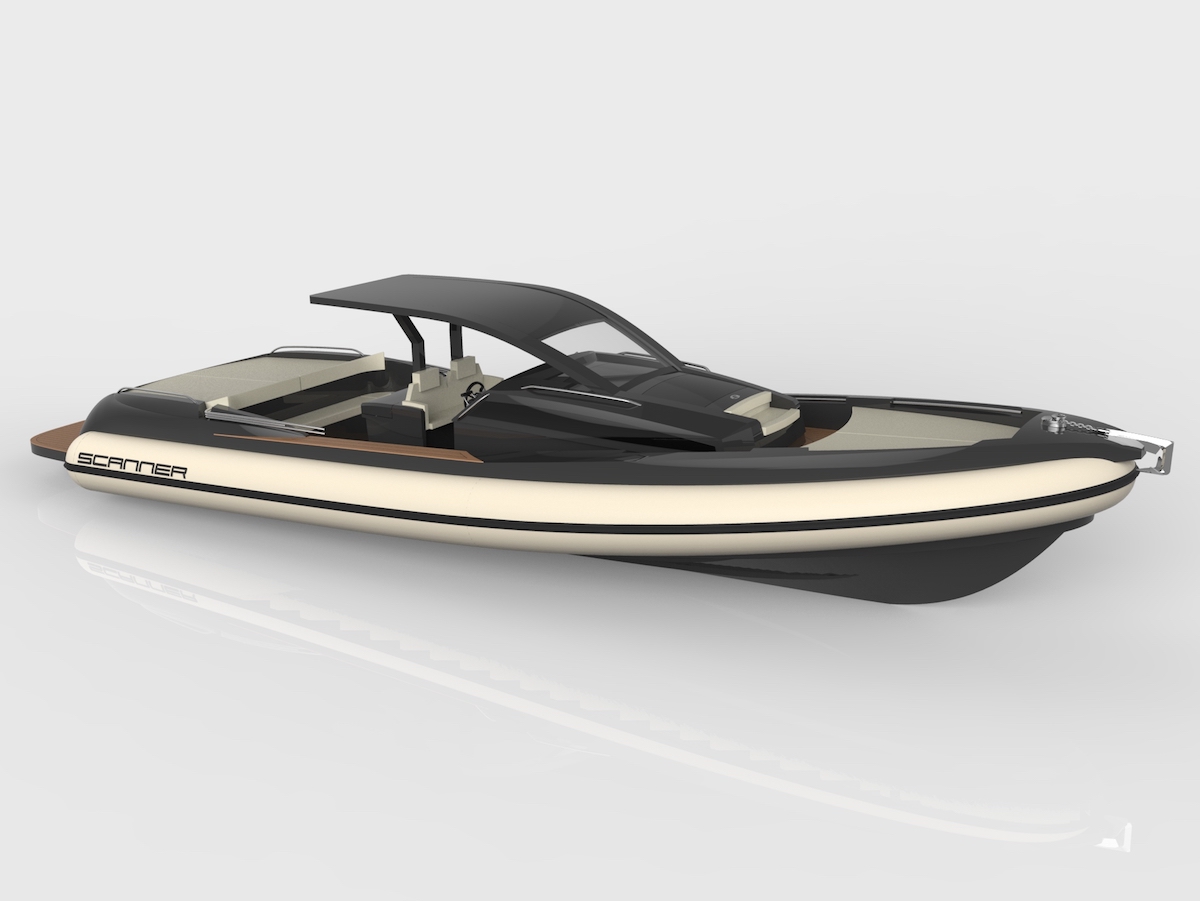 The Prince 38 Sport Cabin is offered with many colour options for the hull, tubes and pillows. The latter are made of Silvertex, a special material that reduces smells and stains. The night area consists of a double cabin with separate bathroom. The owner can also ask for an additional twin-bedded cabin in the stern. As for engine power, the shipyard offers two options: gasoline or diesel sterndrives or outboards installed on an aluminium bracket that makes the bathing platform completely usable.

Recently restyled, the 110 Cabin is a 9.99-meter boat that, equipped with three sun pads – two long ones in the stern and another on the forward deck house – can accommodate up to 14 passengers. Below deck, the night area consists of a twin-bedded cabin with bathroom and shower compartment. Noteworthy are the central console and the windscreen over the pilot station. 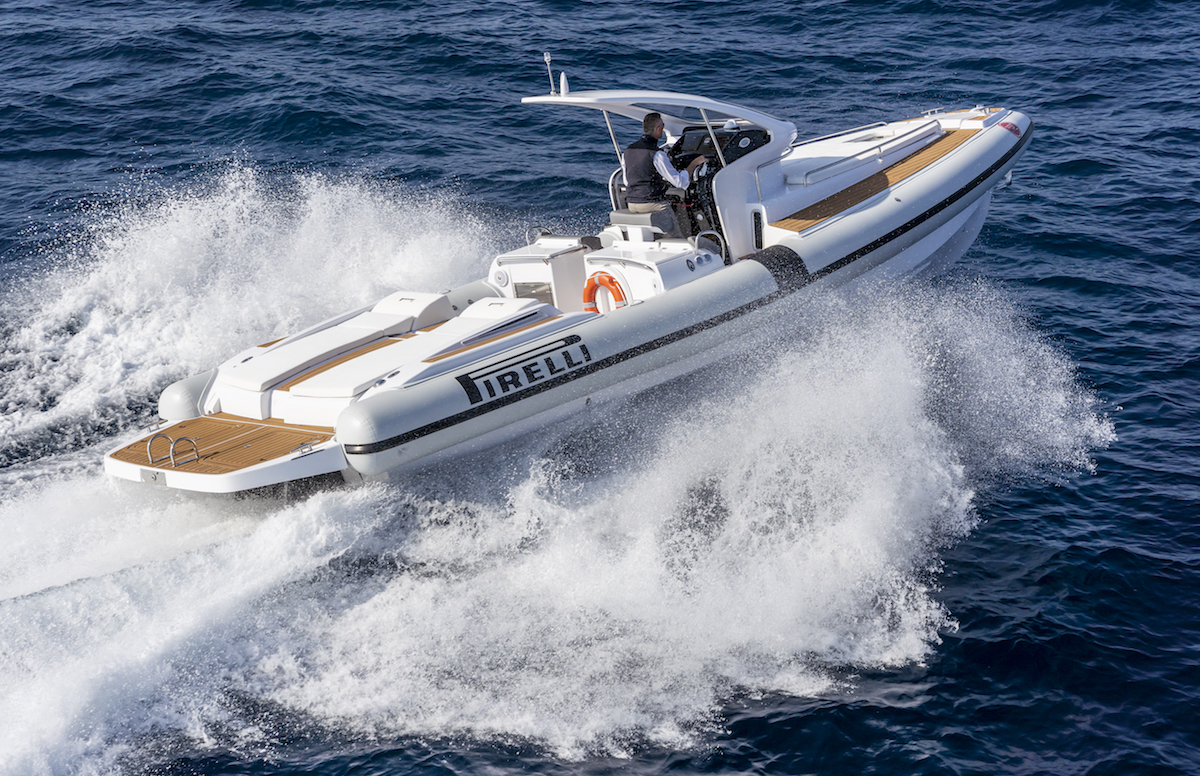 The second model of the Coupé line of the Spanish shipyard, the 377 features a reverse bow, wide forward volumes and a unique T-top and windscreen combination. This walkaround hosts three sun pads: two in the extremities and one amidships, just behind the wet bar. Inside, all spaces are dedicated to the night: two cabins, with the master one in the bow and equipped with a double bed, and the second one under the cockpit and furnished with twin berths. Interiors are completed by a bathroom with separate shower compartment. Power comes from two inboard/outboard 260hp engines that deliver a cruising speed of 30 knots. When fitted with two Volvo Penta V8 300hp engines, the boat can touch a top speed of 36 knots. 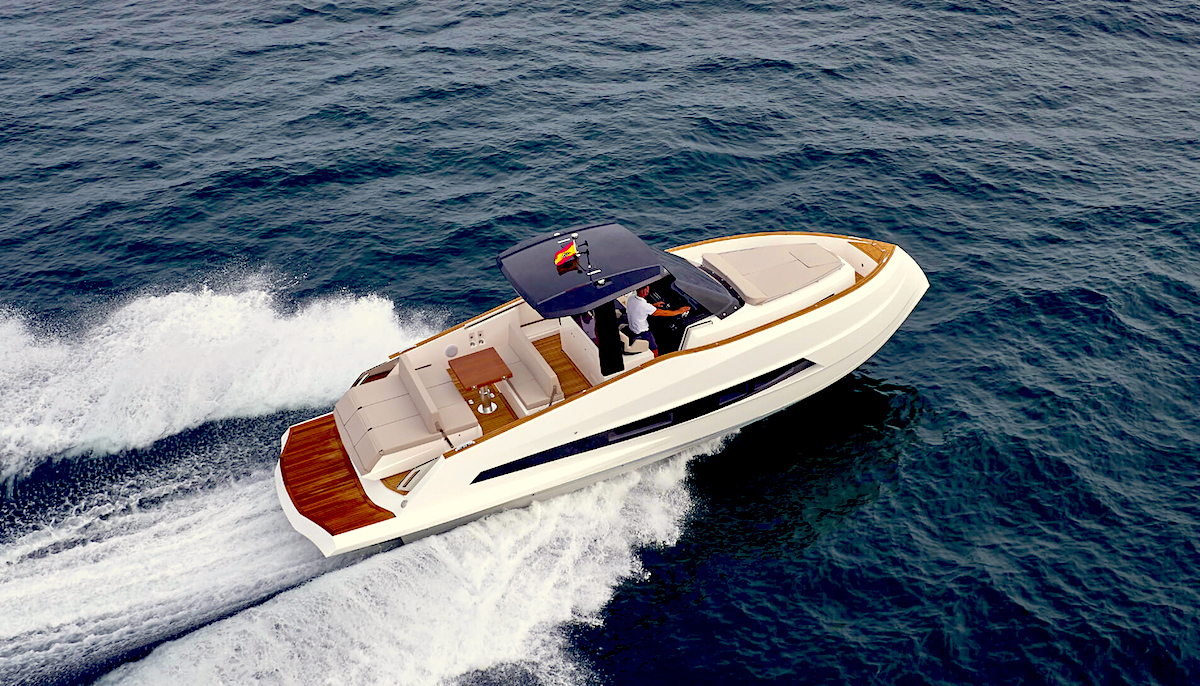 The Cayman 38 Executive is the new flagship of the Italian shipyard, offered in three different versions: open, soft and hard top. Powered by twin Suzuki 350hp engines, she can travel at over 50 knots and support even a third engine. As for construction, Ranieri hulls benefit from the use of a special glue that remains soft in order to better amortise navigation shocks. Below deck, we find an additional galley, four berths and one bathroom. 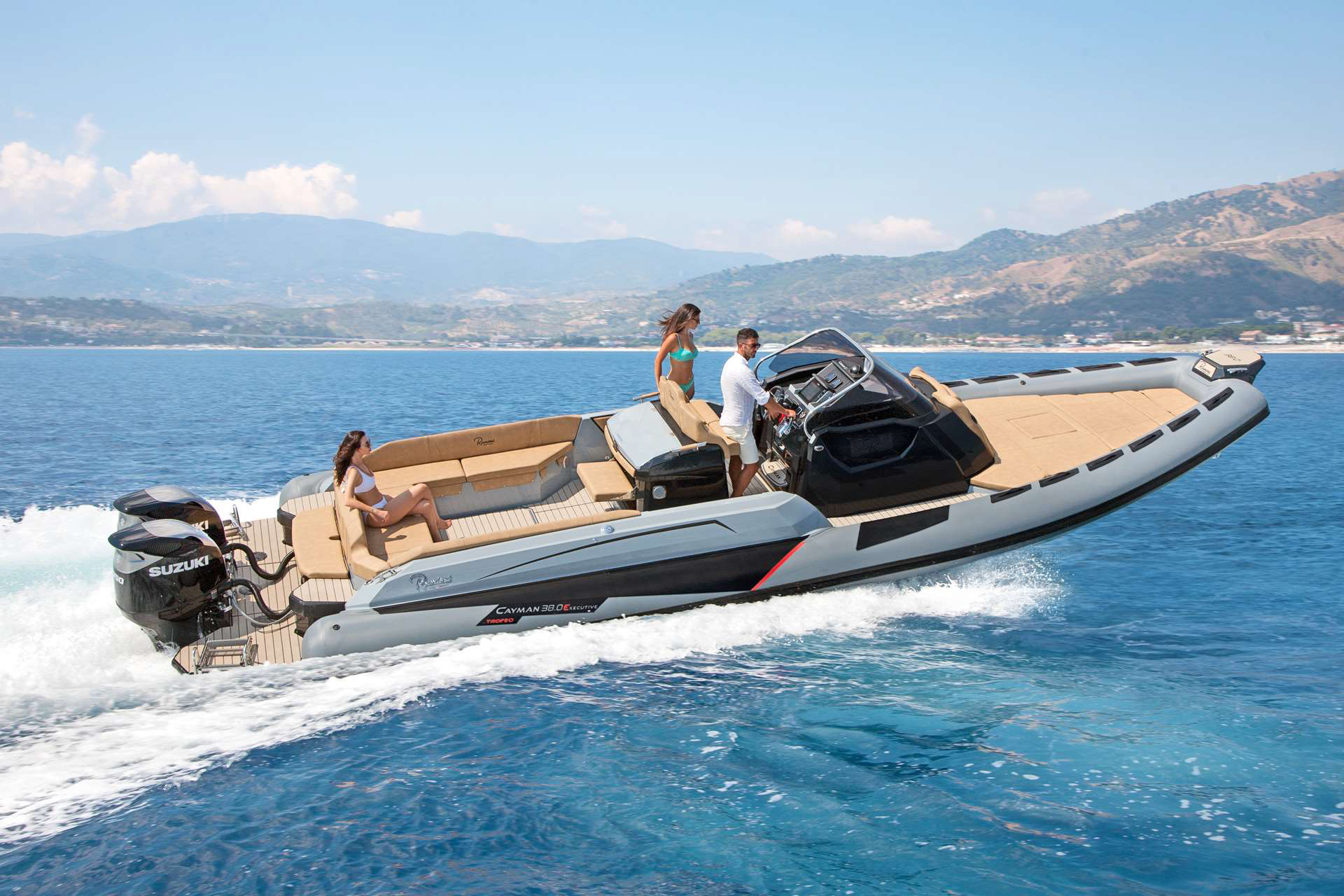 The 380 Real is the greatest 2018 debut of the shipyard, well-known for its unsinkable boats. This model is a bow rider intended for long-range navigation or short cruises. Interiors are minimal, almost a sort of reinterpretation of the fast commuter, yet fitted with a toilet, a shower, a V-shaped berth, a convertible dinner table and a radio/tv entertainment system. The boat is offered in different engine options, from 1,200 to 1,600hp. Exterior layout includes a sun pad that, covering the whole perimeter of the forward cockpit, can turn into a dinner zone with a table or convert into a unique sunbathing platform. This area is accessible from an opening on the windshield that closes the superstructure while sheltering both the pilot station and the front part of the cockpit. In order to make boarding operations easier, the final section of the port side is opening. Under the bow-facing sofa, a large two-door refrigerating compartment can accommodate food and drinks. 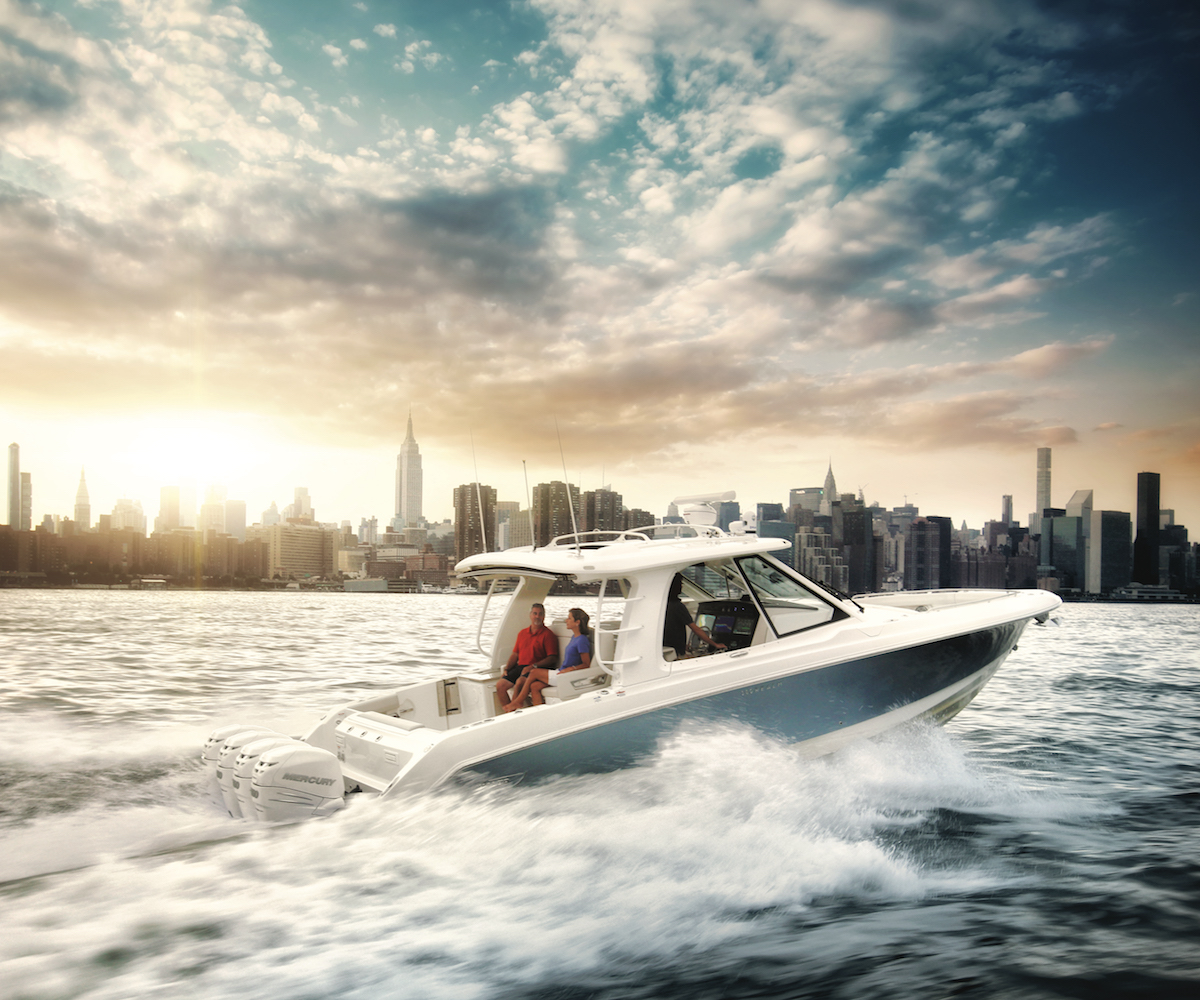 There are no ads matching your search criteria.
Seguire Instagram
PrevPrecedenteNauta Tender 48′, the strength of versatility | PHOTO GALLERY
SuccessivoMediterannean ports: 10 places to visit at least once in lifeNext
In evidenza