Few cities in Italy have such a visceral relationship with the sea as Naples. Those who have a boat enjoy it and those who do not have one dream of it. Because a hull is an escape from everyday life, it is freedom. And then sailing in one of the most beautiful gulfs in the world is a great stimulus. So it’s no surprise that a yard like Fiart, based in Baia, which has been breathing this air for sixty years, is now one of the best interpreters of one of the major trends in yachting: walkarounds. After the Seawalker 43 and 39, a new XL boat arrived within a year, the Fiart 35 Seawalker. We tested this boat (with an overall length of 11 metres) with a pair of Suzuki DF350A outboard engines in the stern for a total of 700 horsepower.

Aesthetically, the boat’s line runs cleanly from stern to bow. There are no elements that interrupt the profile, but the high bulwark makes it safe to move between the helm station and the aft seats. At the dock, attention is immediately drawn to the hydraulic platform. This optional extra (the basic one is fixed) is one of the yard’s gems as it allows outboards without sacrificing the livability of this area. It is precisely this appendage that brings the overall length of this boat, whose hull length is less than 10 metres, to 11 metres.

How does it work? Thanks to a mechanism (made of steel) it raises and lowers as required. When it is raised it allows the outboards to be moved out of the water. When lowered it becomes a submerged base for your baths, probably to the fascinated eyes of your neighbours at anchor.

The deck space is well thought out and one moves very easily from bow to stern. The area behind the T-Top consists of a sundeck that converts into a central table with a double sofa. Serving the deck is a wetbar with a hob (gas or induction), refrigerator and sink. The helm station has double seating and is covered by the optional T-Top and protected by the windscreen. The second living area in the bow is formed by a seat just below the windscreen with a large C-shaped sofa in front that can also accommodate a centre table. The result is two different living areas on board.

Fiart’s 35 Seawalker is an open walkaround boat, in fact the essence of a day boat, but the interior surprises. The clean, streamlined profile hides four berths and truly unsuspected roominess below deck. The cabin in the bow is very wide, especially in the entrance area as well as in the stern, where despite being a structurally lower space, there is never an impression of excessive enclosure. The gem? This Fiart motor yacht also has a head with a separate shower cubicle. It is not a cruiser, but as a weekender the Fiart 35 Seawalker has more than one ace up its sleeve.

Compared to the previous test, with two Mercury 300hp outboards, here we have two Suzuki outboards with 350 horsepower each in the stern. Among the goodies of this top-of-the-range Suzuki engine is the twin counter-rotating propellers. What advantages do they have? Better grip on the water, so much so that some call them the 4x4s of the sea. In any case, these Suzuki engines configured in this way on the Fiart 35 Seawalker have shown that they perform great. The top speed of 40.5 knots is a respectable result, but what is striking is the cruising speed of 25-26 knots at less than 135 litres per hour overall. We had already had a chance to test the hull and here too it proved to be very good, despite being faced with flat water conditions. During the test, six people, 550 litres of fuel and 250 litres of water were on board.

The moment when boat and engines struggle the most is the pre-planing phase. Also due to the large platform at the stern and the resulting friction, until you enter the planing phase consumption is certainly higher. It also has to be said that if you want to during navigation the platform can be raised out of the water to make it easier to enter the planing phase. After 14 knots, however, the platform has practically no influence, as the data below show.The two Suzukis once again demonstrated good responsiveness on the throttles and good manoeuvrability both at speed and at berth. 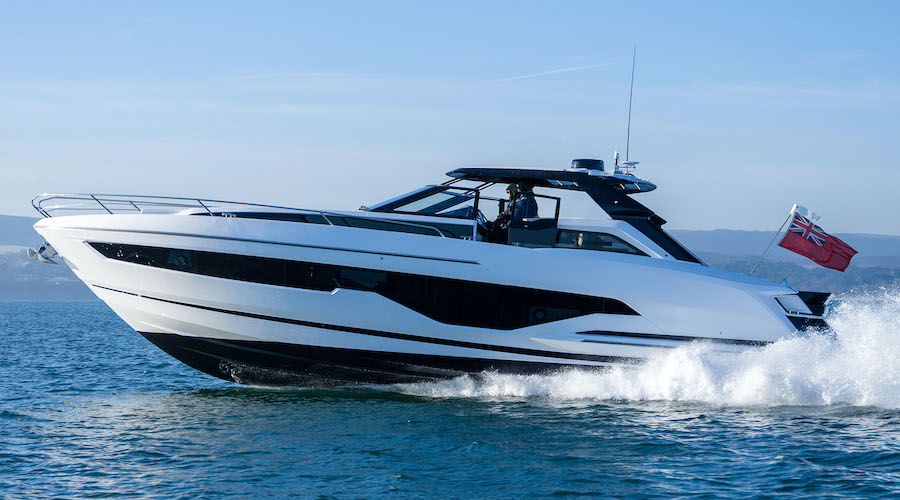