Dolceriva, the Riva’s answer to the open boat boom

The market of open boats, around 15 meters, is one of the most interesting, for the overwhelming success in terms of sales that can have the “right” model. Riva Yacht, part of the Ferretti group and in collaboration with Officina Italiana Design, is back in charge of this segment with the Dolceriva, a 48 foot (14.92 metres) sports yacht that brings the entire class of the Sarnico shipyard to this new open yacht.

Automotive inspiration with a refined and elegant design starting from the stern that start from two models that have made history in Riva as the Ariston and the Triton. Riva Dolceriva is a pure and modern open where the hand-crafted is still present. The foredeck surface is made with the traditional glossy mahogany painting with twenty coats, interspersed with a crystal part with an incorporated skylight, which allows the cabin below deck to have natural light.

From the stern, bow and side handrails, to the auction for the mahogany flag and boots aft, everything echoes the long Riva tradition. Steel is another dominant element, used as a separation material between the elements. The windscreen does not rest on the deck, but is “raised” to make the air flow sideways without letting it rise on the windscreen, generating less turbulence behind.

The tailgate, which when closed is a structural bench, opens to the front revealing, in addition to the integrated steps in mahogany, a large surface. Two specially designed mattresses can be found right on the tailgate. Also with the tailgate open at the sides, there are two storage compartments where it is possible to store the seabobs. 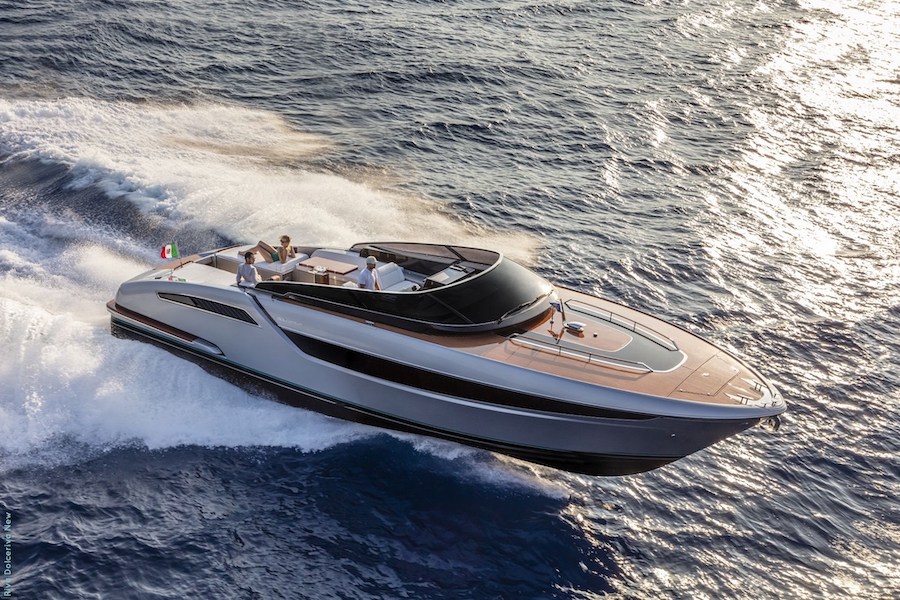 Passing between the two sunpad, separated by a central walkway, you arrive in the cockpit, where there are two additional large sunbeds that hide other storage compartments, and then introduce the dinette in the middle of the boat. Furnished with two large sofas facing each other and a central folding table in mahogany and stainless steel, this area can accommodate up to 8 people.

In the middle of the dinette there is an access that leads to a space below deck, which in the standard version looks like a large locker of 4 m. On request, this area can be used as a crew area, or even as an area with a second guest cabin combined with a small storage space.

In addition, we find the control station, with pilot and co-pilot seat. The dashboard is equipped with the Garmin Empirbus monitoring system, which combines the functions of integrated engine monitoring and navigation, with optional touch screens, one 12” and one 16″ and provides the ability to install the joystick maneuvering.

Next to and under the co-pilot seat, a walled cabinet houses a refrigerator, ice maker, sink, worktop and bar equipment, practical waste sorting bins and various storage facilities. The environment can be protected by a retractable bimini with electro-hydraulic movement.

Dolceriva has in-line V-Drive propulsion and optionally installs a pair of Volvo Penta D13 engines with a power of 1000 horsepower at 2,400 rpm each. In terms of performance, 40 knots of top speed and35 knots of cruising speed are achieved.

The standard engine, provides a pair of Volvo Penta D13 with power of 800 Mhp at 2,300 rpm each, which allows you to reach the 35 knots of maximum speed and 27 cruising speed (preliminary data). The autotrim function is obtained by managing the interceptors.

There are no ads matching your search criteria.
Seguire Instagram
PrevPrecedenteMarquis M42, Mediterranean Charm
SuccessivoPalm Beach 70, a flagship for true gentlemenNext
In evidenza