De Antonio D50 is the 15-meter walkaround for those who want outboards, but with all the advantages of inboards. De Antonio is in fact the Spanish shipyard famous for the outboard solution “hidden” under a sundeck and we talked about the De Antonio D42 (watch the video here). The D50 Open is a project set to become a reality soon: the launch of the first unit is scheduled for April 2021.

.In the world of 50-foot, 15 meters walkaround boats, the De Antonio D50 will be a unique model. That’s because on this size is not so easy to find an outboard solution. Yet what better solution than to combine the two hottest trends in the market together? This is because the walkaround is the boat of the moment and the outboard is the engine by far the most popular, even on this size of boat. 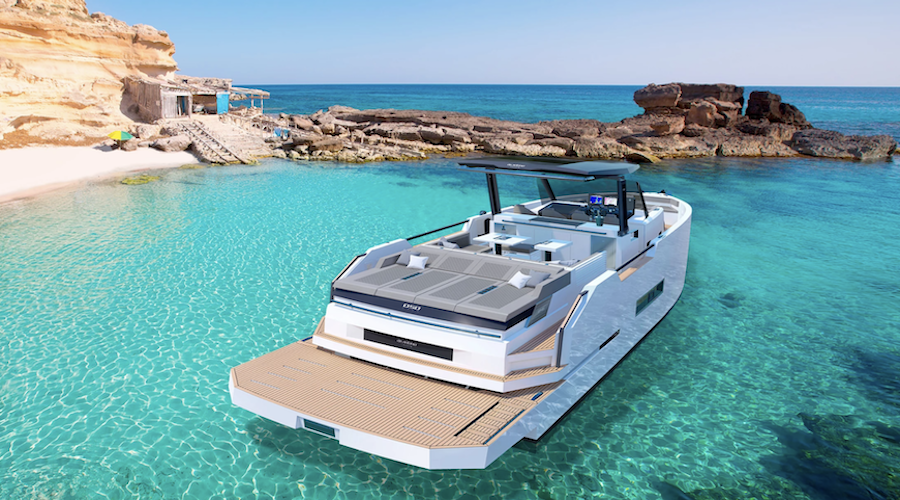 The external spaces, starting from the stern, are designed as follows: the platform, also available with the hydraulic up & down system, and the sundeck that hides the outboard motors and the tender garage. Continuing towards the bow, we will find a dinette and the external kitchen; to follow, the wheelhouse with four seats. These external spaces are covered by the classic soft-top or by a hard-top in carbon, steel and glass, which can be extended both towards the bow and towards the stern.

In the bow, as an alternative to an additional sundeck, you can have a Jacuzzi of 2.5 meters, adapted with a system of fast filling of salt water. 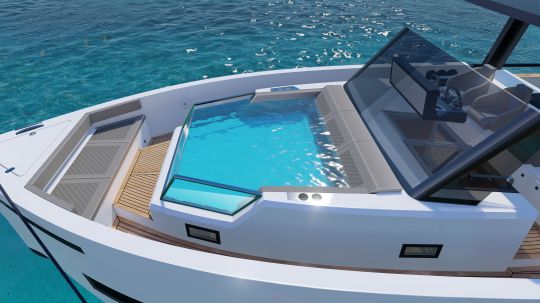 How fast does the De Antonio D50 go? The maximum motorization of the Open version allows the boat to reach 50 knots. This also thanks to a hull with double step, very performing.

For the engines De Antonio has an agreement with Mercury Marine, but the owner is free to choose the brand he prefers.

The D50 Open will be able to mount two, three or four hidden outboard engines: among the available choices, there will be also the powerful Mercury Verado 450 R and Mercury’s latest novelty, the 600hp V12.

.
The standard layout consists of a forward owner’s cabin, a bathroom with separate toilet and complete with shower cubicle and a full beam “U” shaped dinette that can be converted into a double bed thanks to the sliding of the small table placed in the middle.

A second layout foresees, instead of the U-shaped dinette, two double cabins. This layout can be enriched with a second complete bathroom.

A third layout is composed of two cabins (owner’s and double) and a sailor’s cabin complete with bathroom.