Are electric motorboats going into mass production? Not all of them, of course, but the new Candela C-8, heir to the revolutionary Candela Seven, is representing an important case history in the nautical market. This new boat, of which we gave you some previews here, is a 28-footer made in Sweden, equipped with a foil and a 100% electric motor of the latest generation. The cost of €290,000 has proved well-balanced for owners since, according to the company, 60 boats have already been ordered just over a month after the launch.

Everyone is crazy about the new Candela C-8

The first deliveries will start in 2022 and the new Candela C-8 will have an industrialised production system on its side. This has made it possible to keep the cost of this 28-footer as close as possible to that of classic luxury motorboats with a thermal engine.

According to the Swedish boatyard, Candela C-8 is one of Europe’s best-selling high-end 28-footers. Five weeks after the launch of the C-8, Candela has registered more than 60 orders for it, making the new electric powerboat one of the premium 28-footers. Candela Communications Manager Mikael Mahlberg says that by the end of the year they expect to really annoy their heat-powered rivals and carve out some serious market share.

If around 30 boats of the Candela C-Seven have been delivered since 2019, the new C-8 looks set to have a much stronger impact on the market.

Candela C-8: the reasons behind the success

First of all, this motorboat is full-electric and foil-equipped. It lifts itself out of the water, reducing friction and therefore the need for energy. In this way, the sailing range increases exponentially, even with batteries.

The foils are not just static appendages in the water, but are controlled by very advanced software that adjusts them according to conditions. This on-board computer, called Flight Controller, analyzes and corrects the trim about 100 times a second to maintain the best flight height and to counteract waves and crosswinds. According to the boatyard’s estimates, the result is an 80% reduction in energy consumption and considerable sailing comfort, especially in waves of 3-4 feet, which the boat, being in “flight”, passes over without a second thought.

According to Candela, the C-8 will be able to sail for over two and a half hours at a speed of 20 knots. Of course, there is a lot of room for improvement compared to a traditional speedboat, but this is already an achievement that until a few years ago was part of the “science fiction” genre.

The shipyard is also relying heavily on the C-POD, the engine that drives the C-8. The new model promises more than 50 nautical miles (92 km) at 22 knots of speed on one charge of its 45 kWh battery. With the features mentioned above, this boat aims to have an “artificially stable”, pitch-free ride. 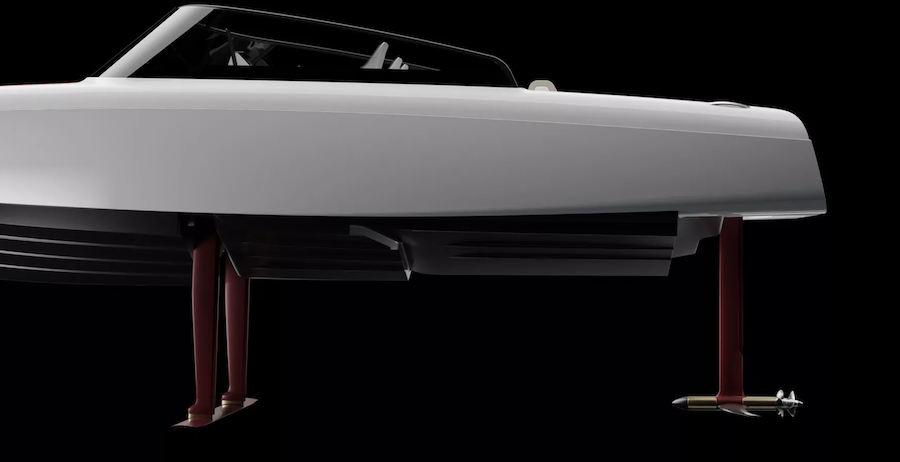 In very rough seas, the C-8 can also be steered like a conventional daycruiser. By pressing a button on the touch screen, the appendages retract into the hull. This function is also useful when entering a shallow harbour, or when you want to trailer the boat. Similarly, in the case of flat water, but perhaps with wood and logs (think of a harbour near the mouth of a river), you can navigate without fear of hitting submerged or semi-submerged objects.