This 19-meter yacht out of the box is trending: Bluegame BGX 60

At the time its entry onto the nautical scene marked a significant turning point. It was 2004, and Bluegame embarked on a new course that it is still holding to over sixteen years later. The idea was to offer something totally out of the ordinary. What caused such a sensation was the decision to focus on a yacht that developed into a line of models whose success was born out of their extreme flexibility and practicality – now, though, it’s the turn of the new BGX family to hog the limelight.

Calling it an extension of the range would be an over-simplification, as it’s actually a conceptual revolution, an innovative design formula that translates into a new way of experiencing the sea and living on board a yacht. All in all, something totally unprecedented, especially when we consider it belongs to the crowded market sector of motor yachts up to 70 feet long.

“The BGX range was launched in 2018 after Bluegame joined Sanlorenzo, a move that resulted in radical changes in the brand paradigm, enabling it to explore new paths and take advantage of new opportunities” says Bluegame CEO Carla Demaria.

“The drive provided by Sanlorenzo led to further development of the established BG line and the recent introduction of the BGX line. Equally daring, the BGX inherits the results of the course Sanlorenzo set out on with the revolutionary SX line, yachts with a truly “disruptive” character expressed through their unmistakable lines and original layout of spaces and walkways, resulting in an entirely new type of configuration. It wasn’t easy to create a product that retained the DNA of the Bluegame originals while offering new, exciting ideas in a market limited to the flybridge format”.

Nowadays the arrival of the latest model, the BGX60, follows the path initiated with the BGX70 in 2019. Given its international debut at last year’s Genoa Boat Show, the BGX60 embodies on a smaller scale the innovations of Bluegame’s new line.

Inevitably the design initiative also involved Luca Santella, head of product strategy and the person who came up with the concept, collaborating with the expert figures of Bernardo and Martina Zuccon.

“The sea takes centre stage”, says Santella. “Everything on the BGX60 has been designed to provide an immersive experience with the yacht’s environment. This inspired the idea of a layout that emphasised physical as well as visual contact with the sea”.

“We’re talking about an authentic terrace overlooking the sea”, says Santella. “It was conceived as a space that can be configured in a number of ways to meet all requirements. It can host a jetski or tender or be transformed into an outdoor living area to furnish with free-standing complements complementing the lower deck lounge. It’s something that’s never been seen before on a yacht that I emphasize measures 19 metres in length”.

The distribution of spaces and walkways are crucial aspects of a design initiative that has created a new style of on-board life. The owner’s cabin next to the lower-deck lounge provides direct access to the spacious beach area at the stern. 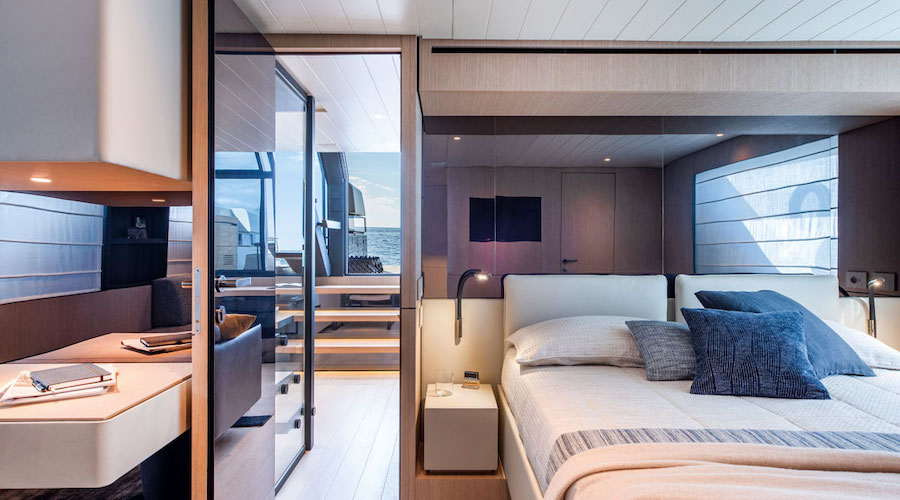 Contact with the yacht’s environment is enhanced by the large windows. On the forward main deck lies another distinctive element of the BGX line, an open-air living space whose size means it can properly be described as a Portuguese bridge.

Life onboard the BGX60 reaches unexpected levels of quality and comfort, especially at sea. “You don’t mess with a winning team”, says Santella. “Lou Codega is once again responsible for the water lines. The variable geometry hull with deep-V forward section provides excellent sea-holding performance, surprising stability in all sea conditions and gentle movement through the waves”.

In addition, the hull configuration coupled with the IPS Volvo Penta propulsion (two 1050 D13s or two 1200 D13s) gives the BGX60 respectable performance, efficient consumption and low-speed planing. The choice of this propulsion platform brings many advantages, including the opportunity to gain space and make significant cuts in vibration and noise, all of which enhance the quality of onboard life.