The renewal of the Bertram range continues at a fast pace. A process that began in 2015 with the Gavio Group’s acquisition of the historic Eagle shipyard. The first step in the new direction was celebrated with the launch of the Bertram 35 Flybridge, followed by the 61 Convertible, the 50 Express, the 39CC, and the 28 CC. In just over 6 years, Bertram has created three product ranges – the CC Series, the XC Series, and the Offshore Series – with a total of 7 new models (the latest two, the 33CC and the 28XC, will be presented at the next autumn boat shows). Not bad for a brand that, in over 60 years of activity, has written memorable pages in the history of American boating.

Another new chapter will be written by the new Bertram 28CC. Without hesitation, the boatyard decided to take the opportunity offered by the Palm Beach International Boat Show to present the new model as a world premiere. If you look at the numbers, this model is the entry-level model in the shipyard’s entire range, but if you read the history, you can see that this is not an absolute novelty but a comeback. In fact, between 1967 and 1969, Bertram built 99 units of the 20 Sportsman, a center console that met with great success at the time and is now considered a true cult object for enthusiasts and collectors alike. Designed by C. Raymond Hunt and powered by a MerCruiser 160 HP inboard engine, the 20 Sportsman was distinguished by excellent seaworthiness. Today, just like then, history is repeating itself. The new Bertram 28CC comes in the wake of the Bertram 39CC (click here to read the full article), which has been presented in 2020. The reasons for focusing on this configuration stem from the market demand combined with the growing success of outboard propulsion. 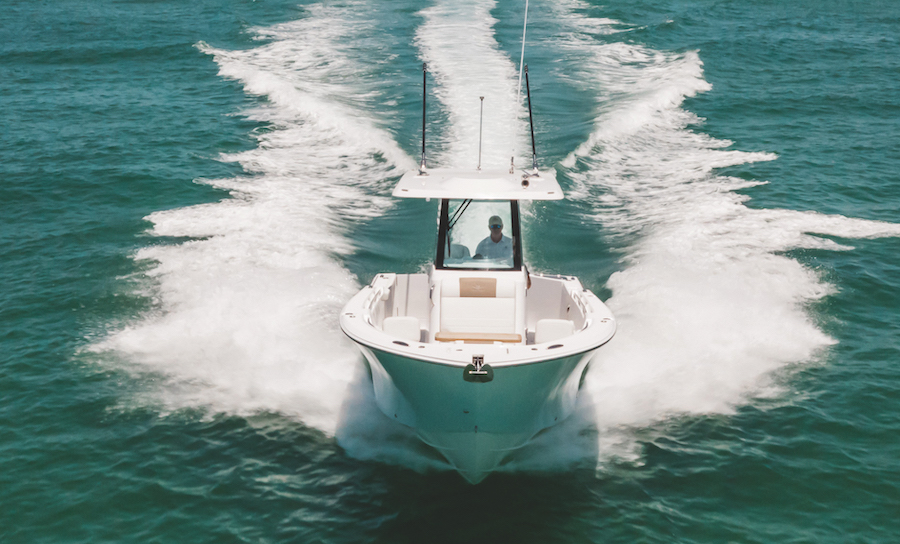 The design of the latest model is based on the idea of offering a high level of comfort and extreme practicality in terms of use: hence, for example, the idea of creating two entrances to get on board, one on the port side and the other at the stern on the starboard side. With a passengers capacity of up to 12 people, the Bertram 28CC is distinguished by a deck plan that has been studied in every detail. 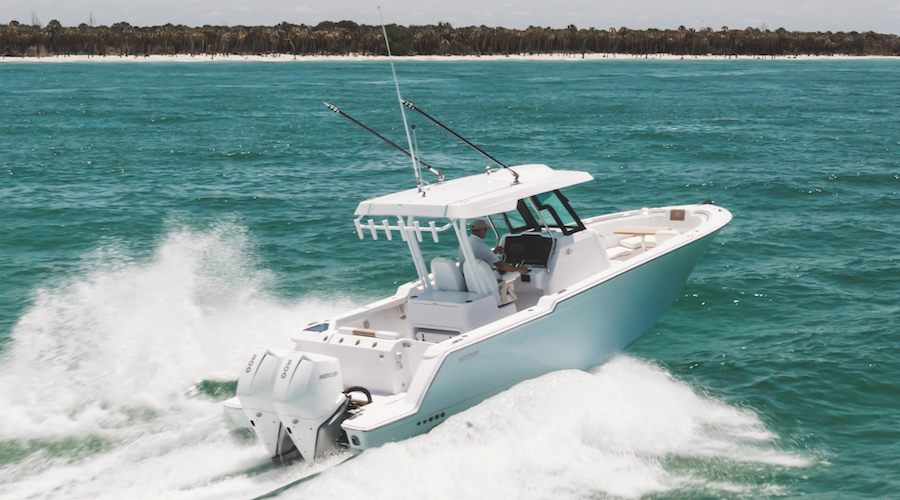 The first eye-catching element is the choice of designing the bow area in line with the bowrider concept, which has been fitted out as a real cockpit with seating at the side. This is a real open-air living area that is completed by another seat positioned next to the helm station. The latter conceals a real service room with a toilet and sink. Despite its small size, this area is located under the helm console and is situated in a lower position compared to the deck, making the most of the height of the structure offered by the helm station. 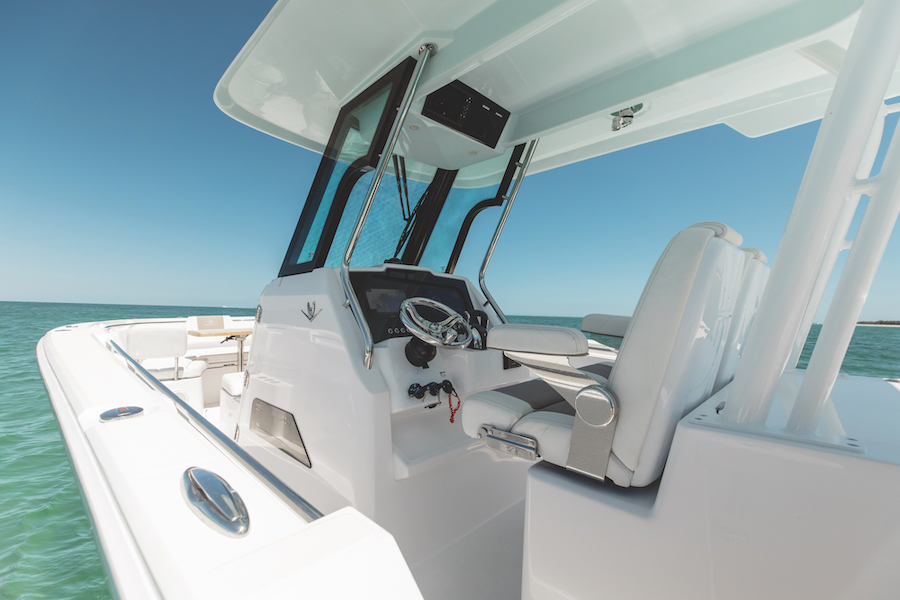 Circulation on board is guaranteed by wide side-decks and a safe handrail located along the internal perimeter of the sides. Sheltered by a hardtop, the helm station is fitted with two seats for pilot and co-pilot respectively. Navigation tools include two 12” Garmin displays while a third is interfaced with the outboard engines and displays their information. Optional equipment includes a joystick for better engine control. 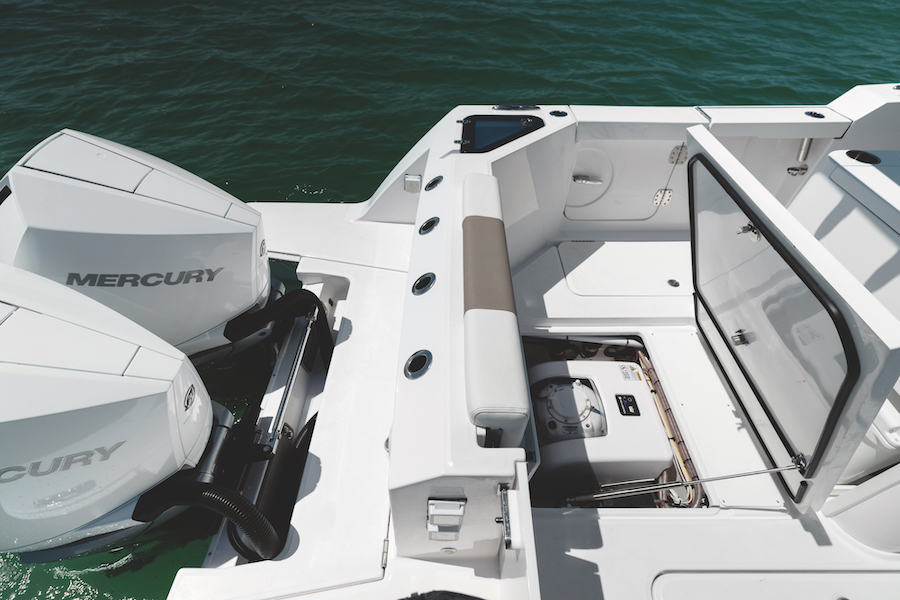 The standard version features twin Mercury 250HP engines, but the Bertram 28CC can also be combined with the new Verado 300s. Behind the two seats, the stern area houses a wet bar that can also be configured with a grill, depending on requirements. Underneath is space for a Yeti icebox. The rest of the cockpit has been designed as an area that can also be used for sport fishing, therefore equipped with rod holders (12 in total), live bait tanks and lockers.

The overall length of the hull is 9.14 meters, but the most surprising feature is the width, which is 2.97 meters, confirming the generous surface area for life on board. 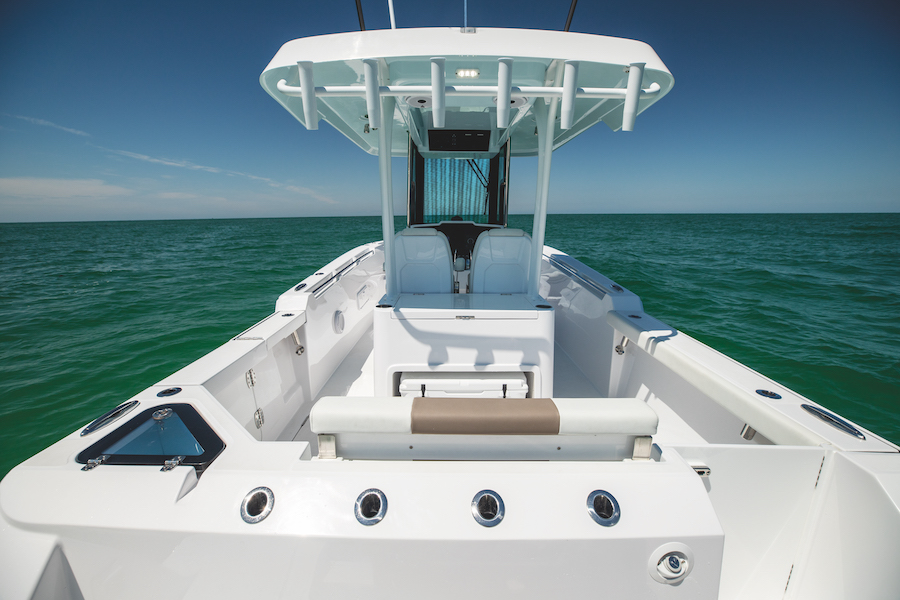 The fuel tanks have a maximum capacity of around 757 liters while the water tanks have a capacity of 106 liters. If necessary, the Bertram 28CC can also be fitted with a Seakeeper gyroscopic stabilizer located aft in the central locker. In short, the new Bertram’s creation is a true small flagship.