The walk-around touches a very important peak with Austin Parker, which takes this philosophy to its extreme consequences. It is certainly not easy to decline a “med boat” approach on a yacht 27 meters. The Austin Parker Ibiza 85, however, has a top design studio on its side: Fulvio De Simoni Yacht Design. The studio has signed off on the shipyard’s entire line, but the flagship, Ibiza 85, looks like a truly out-of-the-ordinary mega yacht. Born from the requests of an owner, combined with the needs of the shipyard, this 27-meter Austin Parker yacht has a very interesting layout, line, and management of interior spaces.

The sporty walk-around line hides a 15-meter long cockpit, carved out between the helm station and the swim platform. The saloon can be opened completely, in a “sedan” version, simply by operating electric controls with hydraulic movement. In this way, the two side windows and the large glass door at the stern open and close. Depending on the needs they protect or free the saloon, emerging from the “retractable” position.

The cockpit is equipped with a sundeck, under which is made the garage that houses the tenders and other accessories, as well as a dining area with a central table and 10 seats. Under the hard-top, there are sofas and furniture equipped to serve the dining area and equipped with refrigerators and freezers.

The helm station, at the height of a yacht of this importance, has 2 pairs of seats, all independent, to accommodate the pilot, co-pilot, and two guests in comfort and safety. A focus will also be devoted to the boat’s performance.

The bow is accessed through protected passages, in walk-around style as we anticipated before, always maintaining the same walking surface of the saloon. At the bow, there is a large area equipped with a “U” shaped sofa, two convertible tables, sundeck and 4 chaise-lounge facing the bow.

We said at the beginning that this boat is predisposed to custom solutions. As a matter of fact, thanks to the 7 meters beam, together with the 27 meters f.t. of the boat, according to the owner’s requests, onboard this yacht there are five different cabins: three doubles and two twins. These cabins will each be equipped with a bathroom and shower, a large kitchen, and accommodation for three crew members. The crew area will be completely separate and equipped with independent facilities. 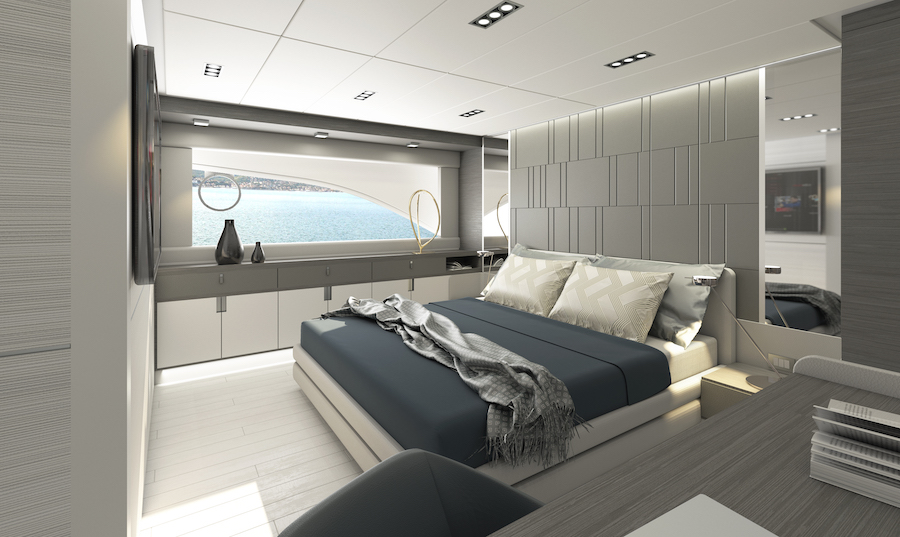 A true sporty motoryacht, the IBIZA 85 mounts two latest-generation Man engines of 2000 HP each connected to Arneson No. 15 surface drives. Cruising speed? The shipyard promises between 38 and 40 knots, with a maximum speed around 45 knots. The yacht has fuel tanks of 6000 liters and a water reserve of 1500 liters, 2 Onan generators of 27 kW, stabilizer Seakeeper 26, air conditioning, and the most sophisticated electronics.

The sleek and sporty line is not, however, suitable only for a young clientele. In fact, the Austin Parker Ibiza 85, thanks to the technical solutions adopted on board also aims to become the ideal boat for owners of a more mature age.

There are no ads matching your search criteria.
Seguire Instagram
PrevPrecedenteWi-Fi and 4G navigation systems chosen for you
SuccessivoTOP 2021 – New boats of 22 metres and moreNext
In evidenza