Andrea Frabetti and the explosive development plan of Sunseeker

Sunseeker, the English shipyard famous for its sporty boats steered even by James Bond, with the new CEO Andrea Frabetti introduce new models and launch a challenge to competitors. The iconic “British style” is now revisited in the name of innovation to rise through the ranks of the world’s major boat manufacturers.

Sunseeker, the shipyard of Wang Jianlin

If Aston Martin is the most representative British-styled car, Sunseeker is the English icon boat par excellence. It is not a coincidence that James Bond, the 007 secret agent at the service of his British Majesty – opts for these two brands in his movies, using an Aston Martin on the road and a Sunseeker at sea. Both, in fact, are fast, high-tech, with unique and sexy lines. Even Chinese tycoon Wang Jianlin, one of the richest men in China with an estimated fortune of 12.5 billion dollars, was not immune to the charm of Sunseeker boats. After having seen the Predator 108 in the James Bond Casino Royale movie, he ordered one just like that with a multitude of luxury accessories on board, including an amazing jacuzzi.

The Wanda 2 (named after his multinational company) was launched in the Huangpu River in Shanghai in 2010. This boat, with its sporty and appealing lines, pleased him so much that, three years later, the company of 65-year-old Wang Jianlin became the largest shareholder of Sunseeker with 91.8% of the shares, taken over from brothers Robert and John Braithwaite who founded the shipyard in 1969. The last Sunseeker budget saw the turnover reach 299.8 million pounds (350 million euros) with a significant increase in the profit which was equal to 6.6 million pounds.

Andrea Frabetti, the Italian manager at the helm

After Robert’s death in April 2019 and John Braithwaite’s retirement from the company a few months ago, the Italian 57-year-old manager Andrea Frabetti has become the new CEO of Sunseeker. He is the person the Chinese Wang Jianlin has chosen to go to the attack and bring Sunseeker to the podium of the 3 top market leaders.

The mission of this manager, who has lived all his brilliant career in the world of motorboating, is to give a further boost to the English shipyard, renewing the ranges, increasing the number of models and restoring the glory of the high-performance Sunseeker models which have made the history of the brand. With one more challenge: to give greater impetus to the British brand in the richest segment of the market, that of superyachts, so as to become an even more important player, on a par with Italian, Dutch and German competitors.

Frabetti seems to be the right person to develop this ambitious development plan. He spent 25 years in the Ferretti Group, where he was one of the vice presidents and product development manager. He developed a successful strategy that led to the relaunch of Riva, one of the most prestigious yet difficult brands of the group. Mr. Frabetti is a man full of ideas. He signed dozen of Ferretti patents, such as the openable hardtop, the first hybrid boat, and the submersible aft platform. In short, products, figures, innovation, and shipyards are an integral part of this life.

He is a manager used to manage dozens of engineers, designers, and workers. A person who perfectly knows how to innovate without distorting the identity of a brand which is the greatest value for those operating in the luxury sector. Frabetti knows this very well and, he always specifies, Sunseeker has a very strong identity, recognized by his loyal customers, who change boats but remain faithful to the shipyard. He calls it the “Sunseeker’s community”.

In short, the Italian manager is the right person to lead the largest British shipyard, which employs 2,600 people and has its headquarters in Poole, in the south of England, in a district that is not only the cradle of English boating but also of the luxury and sporty English automotive world. We’re talking about names like Lotus, Aston Martin, McLaren, Bentley.
A transfer of knowledge and experience between cars and boats that has always been one of Sunseeker’s strengths, at the forefront with its Sunseeker Design & Technology Center. And that will continue to be so. 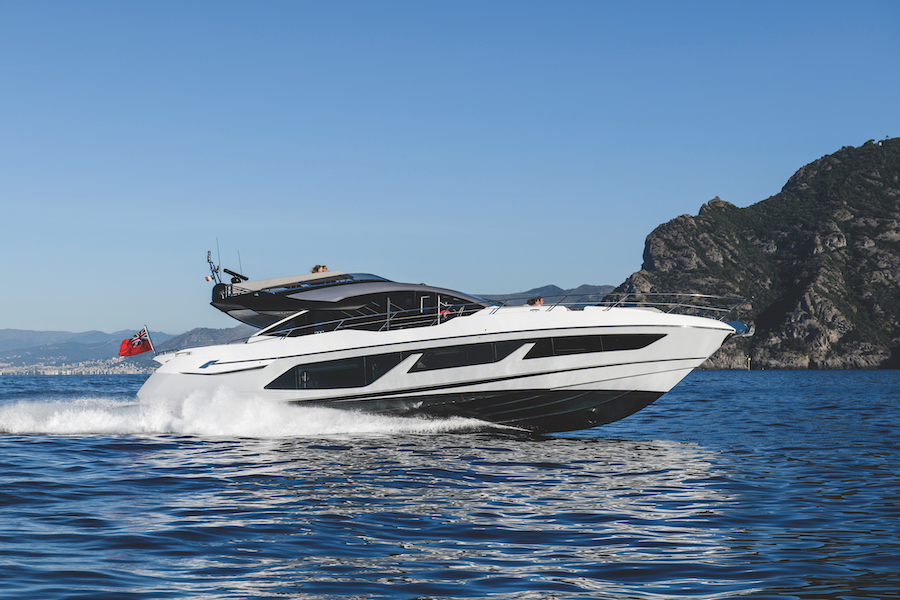 This business plan, presented by the Italian manager for the next three years, is nothing short of explosive. It foresees an investment of 60 million pounds (70 million euros) and the launch of at least 10 new models in 2020/21, which will lead to a radical renewal of the six product ranges, ranging from the 38 feet (11.70 m) of the new Hawk 38 (Performance range) to the 161 feet of the new Superyacht division. No other shipyard has such an extensive range of dimensions enclosed in a single brand.

The luck of Sunseeker, which made it famous all around the world as well as recognizable and imitated by many competitors, is linked to its fast open performance cruisers. The return of this boat category among the models of the British shipyard took place in 2019, with the first unit of the new “Performance” range, the fascinating Hawk 38. The new Superhawk 65 is scheduled to be launched in 2021. The first images circulating on the Web suggest that she will be something truly innovative. A 52-footer will follow her.

A new model of the Manhattan range arrived in early 2020. Named 68, it will be an upgrade of the successful 66 with greater attention to interior details and a more flexible flybridge design. The Manhattan range will be completed by a new 55-footer based on the development of the 52. As for the Predator range (the one dedicated to sporty coupe models), instead, it will welcome the new 55 Evo, an evolution of the 50.

Two brand-new models will be presented at the Cannes Yachting Festival in September 2020. The first if a 65-footer of the new Sport Yacht range which includes sporty flybridge models. The new creation will feature sleeker and more elegant lines as well as a completely new sun pad in the flybridge and a raised helm station.

The second model is the 87 Yacht. With the “Yacht” range, Sunseeker has created a line of small superyachts ranging from 76 to 95 feet. The new 87 Yacht, which joins but does not replace the 86, has several interesting solutions, such as the huge beach-level water club and a living area in the bow, which also becomes an outdoor cinema.

As for the superyachts, by 2021 the 100 Yachts and two models of the Superyacht division will also be launched: the 133 made of fiberglass and the 161 of aluminum. The Sunseeker challenge of Frabetti management is launched. The cards are on the table.

SEABOB F5S WHITE CAM
Salerno
10,000.00€
Seguire Instagram
PrevPrecedentePyxis Yachts unveils P-30, a new walk-around for cruising and fishing
SuccessivoWater toys you must have on your boatNext
In evidenza