The 10 most expensive ports in the Mediterranean Sea 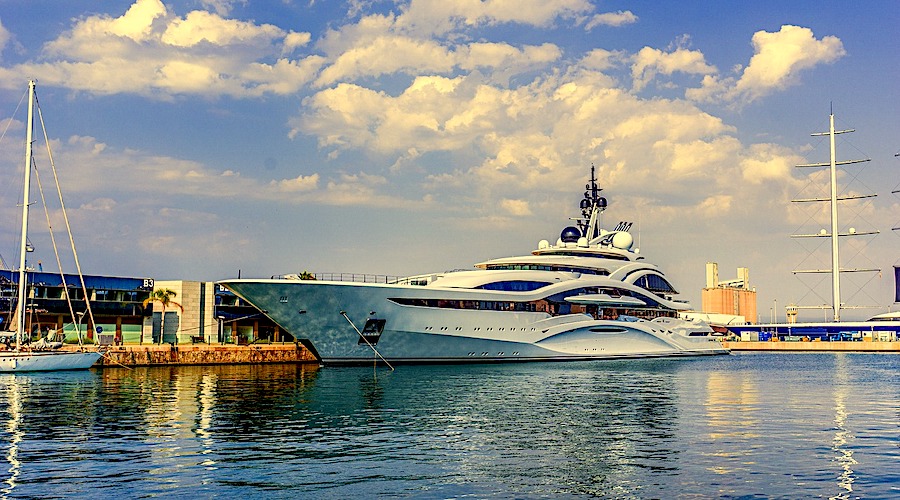 Mooring a mega yacht in one of these ports can cost you even more than 4,000 euros … per day! In this ranking we will tell you where the largest yachts in the Mediterranean go and how much it costs a night moored. The study, conducted by Engel & Völkers Yachting in reference to a yacht of about 55 meters. In the ranking there are also 3 Italian ports.

The Marina of Porto Cervo, on the northern coast of Sardinia near Olbia, has seen the highest increase in prices – equal to 24% to 3,176 euros per day. This brings Porto Cervo to third place in this year’s ranking of the most expensive marinas in Europe. In second place was Ibiza Magna, which was at the top of last year’s chart, with a mooring rate of 4,084 euros per day. Europe therefore remains the centre of the world for mega yachts. Exclusive places, luxury marinas and an unrivalled natural landscape.

The Italian ports of Capri and Portofino are in the middle of the ranking, in fourth and fifth place respectively. Owners who want to moor their mega yacht in the Marina Grande of Capri must be aware of spending at least 3,000 euros a day. The Marina of Portofino on the Italian Riviera reaches a daily price of 2,398 euros as in 2018. With 2,211 euros a day, the Port of Saint-Tropez on the Côte d’Azur comes in sixth place. Another French port, Marina Port Vauban on the coast of Antibes, is in seventh place. The largest port on the Côte d’Azur offers space for over 1,600 yachts, including 19 superyachts. You pay a daily rate of 2,045 euros. The Limassol marina in Cyprus is ranked eighth with a daily rate of 1,533 euros for a 55-meter yacht. A place at ACI Marina Split on the Croatian coast of Dalmatia costs 1,423 euros per day, giving the port its ninth place in the ranking. Port Hercule in Monte-Carlo, Monaco, completes the ranking in tenth place with a daily rate of 1,128 euros.

The 3 largest yachts in the world

There is no doubt: the Mediterranean is still the heart of the world for megayachts. Owned by some among the most powerful families of the Earth, these extra luxury giants have sailed the coasts of Italy, Greece, Spain, France and Monaco this summer. Each of them, more or less, has a curious story to tell. This is why we have made a top ten of the world’s biggest recreational yachts built by a private shipyard and of their owners. Enjoy it

Azzam has been topping the list of the world’s biggest yachts for 5 years. Built by the German shipyard Lürssen, the “king of luxury” with 4 boats among the world’s biggest ones, this 180-meter yacht is owned by the royal family of Abu Dhabi. The owner is the emir of Abu Dhabi and President of the United Arab Emirates Khalifa bin Zayed al Nahyan who, with about 21 billion dollars in his pockets, is one among the richest men in the world. How much horsepower is required to move a giant of 180 meters and 13,136 tons? Almost 100,000! More precisely, 94,000 distributed on two MTU engines, thanks to which the massive powerful Assam touches a top speed of 30 knots and a cruising speed of 25.
Her construction took 4 years, 680 workers and 600 million dollars.

Fulk Al Salamah, the yacht owned by the sultan of Oman Qabus Bin Said comes from Genoa. Given the endless waiting list at the German shipyards Lürssen, the sultan commissioned the work to the Italian yard Mariotti to build what, at first glance, might look like a huge ferry. Delivered in 2016, despite a length of 164 meters and a displacement of 11,000 tons, the yacht of the royal family of Oman can reach a top speed of 19 knots.The stern accommodates a huge helipad.

Eclipe, the mega yacht owned by the Russian oil tycoon Roman Abramovich, dominated the list of the world’s biggest yachts from 2010 to 2013. Abramovich is the 140th richest man in the world, with assets of almost 12 billion dollars. Eclipse is “only” the flagship of a broad range of yachts owned by the Muscovite businessman. 162.5 meters long, the yacht is equipped with antimissile defense systems, submarines and all sort of luxury. Thanks to a 40,000 overall horsepower, she can travel at 25 knots.