The 10 biggest yachts in the world

There is no doubt: the Mediterranean is still the heart of the world for megayachts. Owned by some among the most powerful families of the Earth, these extra luxury giants have sailed the coasts of Italy, Greece, Spain, France, and Monaco this summer. Each of them, more or less, has a curious story to tell. This is why we have made a top ten of the world’s biggest recreational yachts built by a private shipyard and of their owners. Enjoy it

The 10 biggest yachts in the world

Azzam has been topping the list of the world’s biggest yachts for 5 years. Built by the German shipyard Lürssen, the “king of luxury” with 4 boats among the world’s biggest ones, this 180-meter yacht is owned by the royal family of Abu Dhabi. There is also some made in Italy for the world’s largest yacht: the exterior design was handled by Nauta Yachts. The owner is the emir of Abu Dhabi and President of the United Arab Emirates Khalifa bin Zayed al Nahyan who, with about 21 billion dollars in his pockets, is one among the richest men in the world. How much horsepower is required to move a giant of 180 meters and 13,136 tons? Almost 100,000! More precisely, 94,000 distributed on two MTU engines, thanks to which the massive powerful Assam touches a top speed of 30 knots and a cruising speed of 25.
Her construction took 4 years, 680 workers and 600 million dollars.

Fulk Al Salamah, the yacht owned by the sultan of Oman Qabus Bin Said comes from Genoa. Given the endless waiting list at the German shipyards Lürssen, the sultan commissioned the work to the Italian yard Mariotti to build what, at first glance, might look like a huge ferry. Delivered in 2016, despite a length of 164 meters and a displacement of 11,000 tons, the yacht of the royal family of Oman can reach a top speed of 19 knots.The stern accommodates a huge helipad.

Eclipe, the mega yacht owned by the Russian oil tycoon Roman Abramovich, dominated the list of the world’s biggest yachts from 2010 to 2013. Abramovich is the 140th richest man in the world, with assets of almost 12 billion dollars. Eclipse is “only” the flagship of a broad range of yachts owned by the Muscovite businessman. 162.5 meters long, the yacht is equipped with antimissile defense systems, submarines and all sort of luxury. Thanks to a 40,000 overall horsepower, she can travel at 25 knots.

Dubai is owned by the emir of Dubai Mohammed bin Rashid Al Maktoum. Works started in 1996 in Germany, at the Blohm & Voss shipyards for the prince of Brunei, Jefri Bolkiah. From 2001 to 2005, Platinum Yachts, a Dubai-based shipyard, finished them. Interior design is sophisticated, with elegant decorations and high-quality mosaics. Four MTU 8,450 hp engines deliver a top speed of 26 knots and a cruising speed of 25 knots, with a range of 8,000 nautical miles.

Dilbar is a mega yacht owned by another Russian tycoon like Abramovich: Alisher Usmanov, the Russian-Uzbek “Lord of Metal” who is also the first Russia’s metal manufacturer with his Metalloinvest company and the 118th richest man of the world, with assets of 13 billion dollars. 156 meters long, Dilbar is the most massive yacht in the world thanks to a displacement of 15,917 tons.
Built by the German shipyard Lürssen in 2016, she is equipped with a hybrid 30,000 kW engine that delivers a top speed of 23 knots and a cruising speed of 18 knots.

Don’t let the two smokestacks and the superstructure of Al Said deceive you: it’s not a ferry! The taste for massive ferry-styled boats of the royal family of Oman is reflected also in the “little sister” of Fulk Al Salamah, dominated by an astern huge helipad. This is one of the 10 biggest yachts in the world. Delivered in 2008 by Lürssen, with her 15,850 tons, she is as imposing as Dilbar. Ample interiors volumes, designed by Redman Whiteley Dixon, are one of the hallmarks of Al Said. Power comes from twin MTU 11,000 hp engines that deliver a top speed of 22 knots.

147 meters long, Prince Abdulaziz was the world’s biggest yacht from 1984 to 2001. Belonged to the King of Arabia Fahd, today she is a part of the Saudit royal fleet. The lobby on the first floor replicates the interiors of Titanic. Top speed is 22 knots.

Topaz is owned by Mansour Ben Zayed Al Nayhan, stepbrother of Azzam’s owner and Chairman of Manchester City. Topaz has a total value of 300-400 million dollars. She boasts twin MTU 8,000hp engines that deliver a top speed of 23 knots. 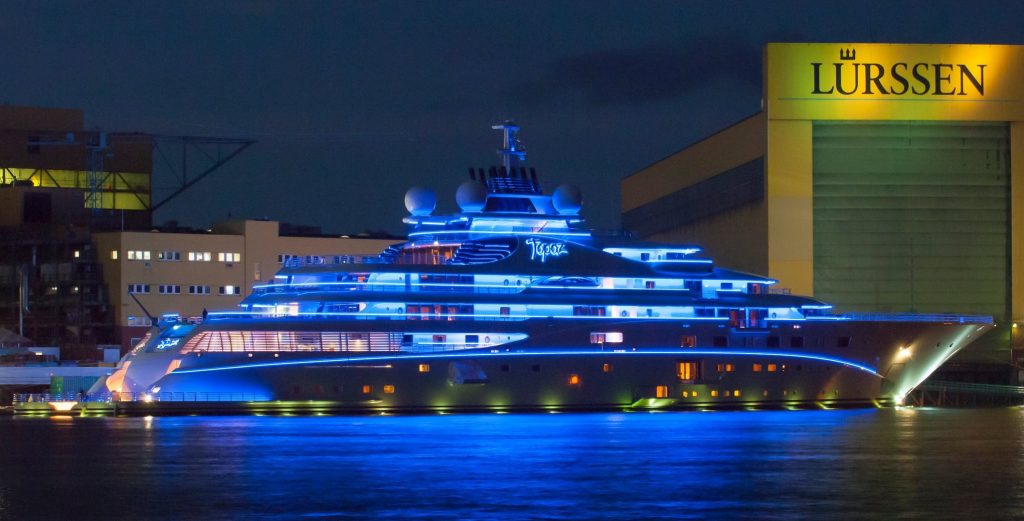 Owned by the Egyptian government since its construction, El Mahroussa is the oldest among the biggest yachts in the world. Commissioned to Samuda Brothers in 1865, she is a floating piece of history that hosted the greatest statesmen of Egypt. 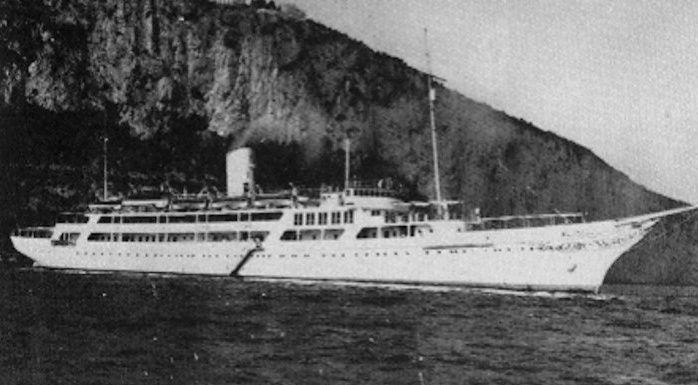 We’re talking about Sailing A, the sailing giant designed by Philippe Starck that never goes unnoticed. Probably is the most famous among the 10 biggest yachts in the world. Characterized by unconventional lines, the maxi yacht of the Russian tycoon Andrei Melnichenko features three masts ( one of which is about 100 meters high). 142 meters long, she was launched by the German shipyard Nobiskrug in 2017. Melnichenko is the 88th richest man in the world and the owner of another yacht named “A”.